MUSIC REVIEW OF THE DAY: BETTYE LAVETTE - THINGS HAVE CHANGED 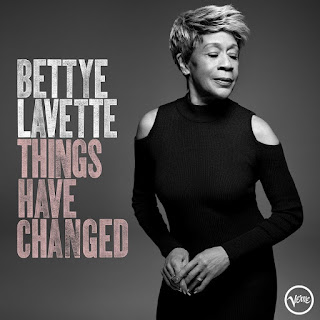 There's no question Bob Dylan has had the blues for a long time, and that's certainly influenced his writing. There have been a few collections of Dylan songs done in blues, soul and gospel styles, and most turn out quite well. This one, from the veteran soul singer LaVette, is cool as can be, her rich, rough voice a fine match for these warnings and weary life lessons from Dylan's catalogue. The songs chosen come from all phases of his career, from the well-known (It Ain't Me Babe) to buried album cuts (Going, Going, Gone), but all of course of the highest calibre. Of the many, many singers who tackle Dylan, soul/blues/gospel singers, especially women, arguably do the best versions.

Sometimes they do a better version in fact. Listen to LaVette dig into Don't Fall Apart On Me Tonight, not the most inspired Dylan performance, but she finds an emotional reading the composer only hinted at. And what LaVette does for the vocals, producer Steve Jordan does for the arrangements. A song that's a real clunker from the '80's, Seeing The Real You At Last, is now slinky and funky. Lavette gives it an update too, with new lyrics. Instead of referring to Annie Oakley and Belle Starr, she's rewrites it as "You could sing like Otis Redding/You Could Dance like Bruno Mars." And it works great, you purists.

Sometimes it's pretty much just awesome singing from LaVette. Mama, You Been On My Mind has spare backing, and a heartfelt and sentimental treatment that will have you reaching for the Kleenex box. Where Dylan was singing about a lover, LaVette sings it to her own mother. Ain't Talkin', one that Dylan himself does a mighty job singing, here gets an eerie and subtle arrangement with a string quartet. Others have a grade-A cast to catch a great groove. Jordan handles drums and some guitar, long-time Dylan guitar player Larry Campbell is all over the record, Leon Pendarvis (James Brown, SNL Band, etc.) handles keys and Pino Palladino (The Who) covers bass. Guests include Trombone Shorty, Ivan Neville, and one Keith Richards on a couple of tracks. Honestly, the arrangements and playing are so fresh, it would be worth hearing these reinterpretations of the Dylan material with almost any vocalist, they are that good. But it's all sublime with LaVette's passion leading the way.
Posted by Bob Mersereau at 9:47 PM