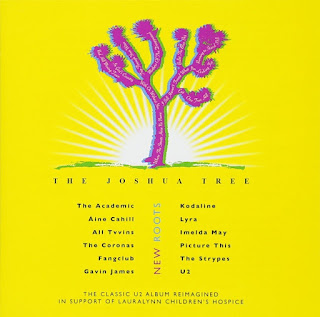 Here's a charity project that's all about Ireland, but with enough interest that it's made it's way across the ocean. The charity in question is a children's hospice in that country called LauraLynn, and the album includes mostly new and upcoming Irish musicians who aren't known here, except for a couple of exceptions. The real star here though is the material, one of the best-known albums of Irish origin ever, U2's landmark The Joshua Tree. It just had its 30th anniversary, which was the impetus for this new version.

Each track on the original album has been covered by one of the groups or solo artists, either in loving recreation, or with a new and novel arrangement. The known names here include Imelda May, who puts her tremendous vocal talents into a spare version of I Still Haven't Found What I'm Looking For, slower and dominated by her mighty pipes. The only other act I'm familiar with is The Strypes, youngsters who weren't even born until almost a decade after Joshua Tree's initial release, who put their considerable energy into a far-more rocking take of Trip Through Your Wires. That's the main flip-flip for cuts here, the bigger songs are done slower, and the moody ones toughened up.

Gavin James, a star singer-songwriter at home who has been making waves here on TV shows and opening up for Ed Sheeran, will probably be a well-known name soon, gets the honour of doing Where The Streets Have No Name, a more thoughtful cover certainly. The Academic, the current hottest band in the country, who went to number one with their debut album, put a sharper edge (pun intended) in In God's Country. It's actually an interesting way to be introduced to a bunch of new groups.

And what of the superstars originally responsible? Well, they are always charity-minded and nationally-focused as well, and go above and beyond for the cause. The compilers here make note of the fact the band and their publishing company are donating all the publishing royalties from the sales and airplay, plus they show up too, with the final cut. It's a live version of Red Hill Mining Town, recorded on their anniversary tour last year for the album. This set is win-win for everybody.
Posted by Bob Mersereau at 5:45 PM