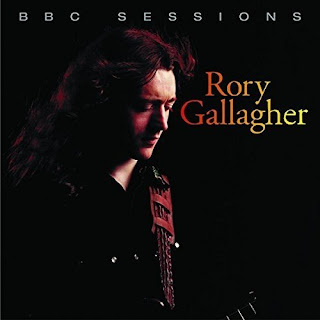 Back when dinosaurs roamed the Earth, so did white British electric blues guitar heroes. There was the A-list of Clapton, Beck and Page, and then there several more in the next tier, including Alvin Lee of Ten Years After, Steve Marriot of Humble Pie, and Ireland's Gallagher. Of course, if you were a fan, you'd swear your guy was the best. I find it interesting now that so much attention went to the guitar player, it's quite out of fashion these days. But anyway, a small but vocal portion of rock/blues fans thought Gallagher was the best of them all.

Gallagher's North American heyday was at the end of the '60's with his power trio Taste, and then into the early '70's as a solo act, most famously with the live Irish Tour '74 album. He never quite broke through into superstar status, but he sold a ton of albums, especially his live ones, and was best known for his exciting stage shows. He also was quite a big deal across continental Europe into the '80's, before his death from liver damage in '95. During his time, he did dozens of different TV and radio broadcasts, always a favourite for those media, and especially on the BBC. This double-disc set was compiled by his brother and long-time keeper of the flame, Donal.

Chosen from several hours of available material, this set includes one disc of live concert tracks, and another of studio recordings done of the Beeb. The live stuff is mostly from the late '70's, except for one 1973 cut, while the studio work was done from 1971-74, with a side trip to the '80's for a number. Unsurprisingly, the live cuts are full of fireworks, especially when Gallagher steps away from his own material to riff on some classic blues. The traditional number Roberta is a great example of his speed and energy. Other cuts feature his passionate vocals, often overlooked, and he certainly was one of the better singers among the guitar heroes. He was like a rawer Clapton, without the softness but with lots of melody. Meantime he could blaze away between vocal lines, and totally command the song, the same way Pete Townsend could dominate. I Take What I Want here matches, I feel, the sheer mastery of Hendrix. This is a decent place to start with Gallagher, and a real treat for this old fans.
Posted by Bob Mersereau at 9:38 PM