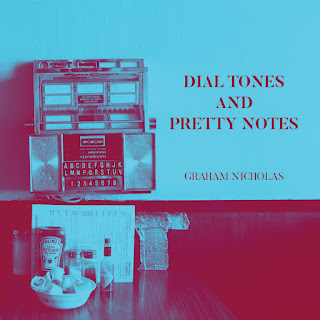 Thanks to a little bit of serendipity, I happened to be in Toronto for a brief trip a couple of weeks ago, and caught Graham Nicholas at his weekly residency at the Cameron House. It just so happens he's gearing up for a big East Coast trip with another favourite, Jerry Leger, so I'll be able to see more of him soon. I liked what I saw that night, and what I'm hearing on his latest, Dial Tones and Pretty Notes.

Named one of Toronto's Musicians To Watch In 2018 by Now Magazine, Nicholas has developed a twangy sound that has some straight country, some alt-country, and plenty of sizzle when needed. There's a tremendous amount of emotion flowing through his songs, with his characters hurt by love and struggling to keep afloat, such as Keeping My Soul Alive, with its sad mandolin, and it's chorus "Cause my heart is blind to the things you do/Yeah I lost your love a thousand times, and it changes you." Sometimes it's old wounds that still hurt, as an old lover comes back to a dying town, reviving memories in Ghost Town: "After all this time it's kinda hard to say/Well was it me or you or this place that changed." There are just as many songs shot through with keyboards and a stronger beat that give the album a solid mix of moods, and a bit of hope that love will win in the end.

Nicholas and Leger bring their double act to a bunch of Maritime venues in May, starting May 11 in Bass River, N.S. at the Community Hall. May 12 they are in Berwick, N.S. at the Union Street Cafe, then the 13th it's the Carleton in Halifax. May 14 sees them at Paddy's Pub in Wolfville, N.S., and on the 15th they cross the province to Antigonish and the Townhouse Brewpub. Then it's on to New Brunswick for a May 16 show at Plan B in Moncton, and then an early festival gig at Paddlefest in St. Andrews on the 17th. May 18 sees the duo at the Trailside in Mount Stewart, P.E.I., the 19th is reserved for Pepper's Pub in Saint John, N.B., and then the whole big jaunt in the East wraps at the beloved Dunk in Breadalbane, P.E.I. on May 20.
Posted by Bob Mersereau at 10:47 PM