MUSIC REVIEW OF THE DAY: DAVID BOWIE - THE NEXT DAY 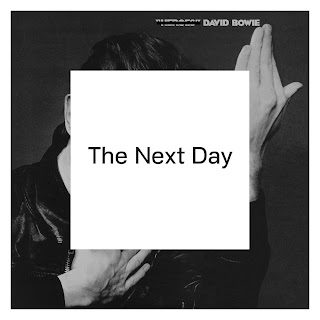 Well, it ain't Tin Machine.  Yay!  And it doesn't resemble the last run of Bowie albums from ten and more years back, forgettable efforts with names such as Heathen, Reality and Outside.  And despite its reference on the clever cover, it's not the return of "Heroes" either.  Nope, if I was going to pick an era this album feels in synch with, I'd go with Lodger and Scary Monsters.  And that to me, is very very welcome.

After several listens now, I'm thrilled with this Bowie.  It's a rock album, a guitar album, featuring compact songs, interesting lyrics and great, classic Bowie vocals.  He hasn't lost a step, and this has to count as a terrific comeback, certainly much more than I expected.  There are some great anthems, and memorable choruses, and every tune crackles with energy.  There's so much guitar, it seems like Bowie has been itching to make exciting, powerful music again.  Leads rip through each number, mostly by Gerry Leonard and old hand Earl Slick, with that old Bowie signature, heavy on the effects pedals and non-standard sounds and notes, harkening back to the days of Robert Fripp and Adrian Belew contributions.

He's also walking the fine line between popular and experimental, certainly leaning towards the melodic, but still with enough edge to satisfy those who want Bowie to be progressive.  It's not the mass-appeal of the early 80's Let's Dance and Blue Jean days, and won't see him back on radio playlists, but that's good too.  That was too clean.  This is artistic, top to bottom.

Fans of the really old stuff will get a kick out of two stand-out cuts.  Valentine's Day could be an out-take from Aladdin Sane, with its sha-la-la backing vocals, twangy guitar, lyrics about scrawny hands and icy hearts, and the man sounding like, yup, Ziggy.  You Feel So Lonely You Could Die, one of the few slower tempos, has the big drama of a Diamond Dogs number, with Bowie now in his lower, impassioned voice, piano and strings and soul singers behind him, doomsday lyrics such as "buildings crammed with people/landscape filled with wrath".  It's funny, I was willing to let Bowie go gracefully into his retirement.  He'd done enough great music.  Now I want more, and quickly.  And please, oh please, tour.  This album would sound great live.
Posted by Bob Mersereau at 9:11 PM