MUSIC REVIEW OF THE DAY: GARY ALLAN - SET YOU FREE 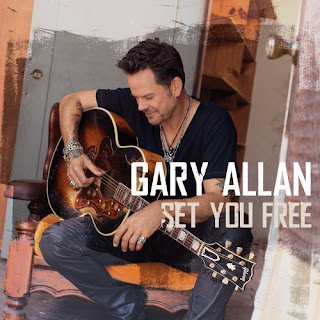 I can count on one hand the number of mainstream, major label country stars our of Nashville I like these days.  Heck, it might be one finger.  But I always enjoy a new disc from Gary Allan.  True, he is marching the same path as the rest of his contemporaries, and it's modern pop music with a twang, rather than anything traditional, but he does it so darn well.  He can write great lyrics, choose equally good songs by other writers, and always manages to give his songs just enough edge and surprise to make them interesting and fulfilling.

Maybe it's because he's earned the stripes over the years to produce himself, and insists on the best quality, and won't cross the cheesy line.  Maybe he's accepted he's more modern than retro, and as much as Haggard is hip and Cash is cool, he knows he isn't them.  Whatever, he's a talented dude who doesn't pander, doesn't sing or write songs about heartland and farms and trucks, but instead sticks to bad break-ups and booze.  A quick check of the lyrics confirms that, yes, every one of the twelve cuts is about breaking up with somebody, with the exception of the last, where everything's great and she's the best thing ever for him.  But the rest of the time, either he's doing the dumping (Tough Goodbye), or he's dying from a broken heart (It Ain't The Whiskey).  And he's drinking enough to fix the provincial deficit here, with the booze flow depending on the severity of his broken heart.  Finally the two themes merge in the perfect Hungover Heart:  "Don't get strung out on a woman/'Cause comin' down is the hardest part/When she walks away and leaves you/With a hungover heart."

As for the music, Allan's a good singer, even with that aw-shucks vocal hiccup that seems to be pre-programmed into all Nashville microphones.  It has the big, brilliant sound, thanks to A-list session guys such as Dan Dugmore, Michael Rhodes and Chad Cromwell.  But there's that extra something in every track, whether it's a smart ending, or a smooth move like all the instruments dropping out for a chorus in One More Time.  He's been producing quality albums and singles since 1996, and it continues to pay off; Every Storm (Runs Out Of Rain) from this album hit #1, his first chart-topper in nine years.  Best of all, he doesn't wear a hat.  That's a good reason to like him right there.
Posted by Bob Mersereau at 8:11 PM