MUSIC REVIEW OF THE DAY: NICK CAVE & the BAD SEEDS - PUSH THE SKY AWAY 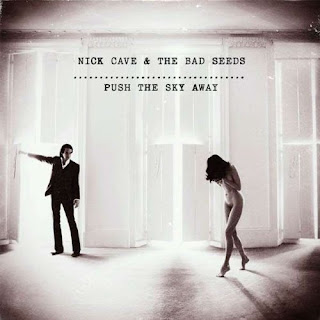 This is certainly a Nick Cave we haven't heard in a while, certainly since the mid-90's.  Of late, when he isn't making film scores, he's been nasty loud with his side band, Grinderman.  Here he's gone into a much quieter zone, and the Bad Seeds are reigned in.  His closest collaborator these days, Warren Ellis, is the major contributor, not just with his violin, but as the creator of the loops that each track is built from.  These ominous beds feature different instruments and textures, much more than percussion, more like the grooves and bones of the songs.  The rest of the band and Cave add subtle and subdued accompaniment, even the drums quiet when they are there.  More likely you'll hear strings, piano, a flute, vocalists, and above it all, Cave's dominant vocals, sung or spoken.

It's also Cave the poet, presenting a series of fever dreams, dark tales but none really heavy on the narrative.  It's darn hard to figure what the songs are about, certainly not like his nasty murder ballads or explorations of Biblical characters.  He's being a lot less literal, taking us to imaginary times and places.  There's a riverside, where the girls come from the Capital, to dance in front of the boys in some sort of mating ritual, in Water's Edge.  Jubilee Street is a bad boulevard, where a shady woman is taken out by the Russians, which puts the narrator in trouble, because he's in her book on every page.  In another song, Mermaids exist, as proof of God.  And who better to tackle the so-called God Particle, as Cave writes the Higgs Boson Blues, heading to Geneva, running into Robert Johnson and the Devil, finding out what it all means.

There's the usual shock lines; he's walking down the street, "with a foetus on a leash".  Some is just fun, such as "Hannah Montana does the African Savannah, as the simulated rainy season begins/She curses the cue at the Zulu/and moves on to the Amazonia".  Sometimes he gets a little too old-school Dylan, filling up the scenes with things like a mummified cat, and Higgs Boson Blues sounds like an update of a track from Neil Young's On The Beach.  But mostly it's our favourite creepy philosopher, taking us through his subconscious, the softer sounds actually making it more unsettling than some of his noisiest work.
Posted by Bob Mersereau at 10:37 PM