MUSIC REVIEW OF THE DAY: RYAN COOK - WRESTLING WITH DEMONS 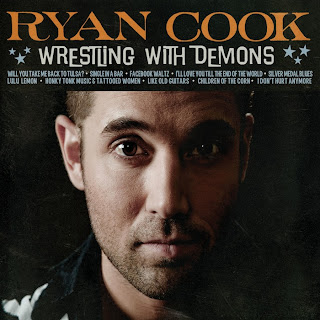 Nova Scotia's real country performer, Cook defiantly makes music that sticks to the tried-and-true sounds of the masters.  Whether it's fiddle and mandolin music, honky tonk, or true-life weepers, there's no attempt to rock it up with high-tech production and corporate sounds.  If there's a different sound here, it's a cool addition, like the clarinet solos that sit smoothly in I'll Love You To The End Of The World.  One of the badges of legitimacy here is the band, which features that East Coast giant of the strings, J.P. Cormier, and the last two living members of fellow Bluenoser Hank Snow's band, Kayton Roberts and Roger Carroll.

Where Cook is modern is in the lyrics.  Here's a guy that can put wrestler/actor Andre The Giant into one song, and write an entire number about cyber-stalking called Facebook Waltz.  He can write a mean love song, with Silver Medal Blues about finishing second place in romance.  He also has a comedy flare, which comes out in several songs, sometimes in satire.  Lulu Lemon is about the yoga pants trend, with a few too many double entendre's and even an auto-tuned vocal section, mocking that trend.  More successful is Children Of The Corn, which takes on genetically-modified food rather brilliantly.  I can't imagine George Jones doing that, but that's the irony of country music these days, the classic stuff is now enjoyed by the exact opposite of the stereotypical redneck.

Humour aside, there are several numbers here that are perfectly straight and true, including the lovely Like Old Guitars, a touching ballad.  Will You Take Me Back To Tulsa? pretty much describes the problem of being true to country these days, as our hero admits playing country music won't pay the bills, while the patrons of the bar shout out requests to him for Rascal Flatts songs.  The trouble is, the song sounds like a hit single to me.  At least, in an alternate, fair universe.
Posted by Bob Mersereau at 9:56 PM