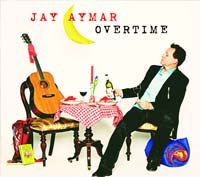 Poor old folk music.  The definition is getting blurred beyond distinction these days.  Any kid with an acoustic thinks they are folk, and if you put a banjo up there, and an attempt at an old-time accent, it doesn't matter that they are just singing pop songs, it gets called folk.  I liked how the Canadian rock writer Nick Jennings summed up Mumford & Sons after the Grammy's:  Coldplay with mandolins.

So, it gives me great pleasure to say this is a folk record.  Aymar is a hard-touring, no frills performer, have acoustic guitar, will come to your town guy.  He's been here, he's been there, he's been everywhere.  In fact, the title track of the disc, Overtime, is his version of This Land Is Your Land, a shaggy dog story of his touring life, starting in Newfoundland and ending in B.C.  He's played them all.  And of course, that alone inspires a bunch of songs, whether they are reflecting on the state of things he's witnessed, or stories he's picked up from the road.  And, being a talker, he gets to sit and chat with folks (as in Folk), and find out what they're thinking.

There's a mix of classic themes here, from the rural tragedy of That Old Ravine (mom died in the creek), to Three Love Stories, a Prine-esque look at three later-in-life couples who get together for a little mature romance.  In the grandest tradition of folk, there's political commentary as well. Your Precious War has the reality of life for the soldier when they return home, while King Of The World is sung in the voice of Bush Junior.  Producer David Baxter keeps things simple, with the basic accompaniment letting the lyrics tell the story in each number.  See, that's folk, in my view, music from the people, to make you dance a bit and make you think too.
Posted by Bob Mersereau at 8:58 PM