MUSIC REVIEW OF THE DAY: SOUND CITY - REAL TO REEL 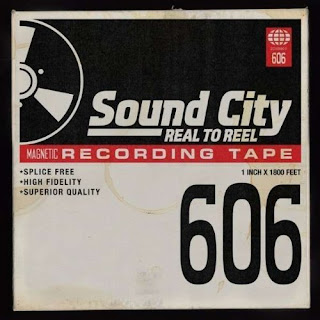 This is the companion music to Dave Grohl's new documentary on the famous California studio, Sound City, where Nirvana made Nevermind, and dozens of other hit albums were produced.  Whatever magic the place held certainly grabbed a hold of Grohl, who ended up not only making a complete film, but now leads a group called the Sound City Players, with loads of his famous friends lending a hand in select concerts (like this week's show at SXSW) and in making this album.

Grohl bought the unique Neve recording console when the studio closed in 2011, and set it up in his own space.  For this album, the idea was to collect people in different small units to create new songs on the spot, more or less, and have them sound great.  Okay, that was accomplished.  I can't argue with the audio, it does sound great.  The guest list is impressive as well.  You have Trent Reznor, Josh Homme, all the Foos, Rick Nielsen of Cheap Trick, session legend Jim Keltner, Black Rebel Motorcycle Club and even Stevie Nicks, a Sound City veteran.  And now we know what Paul McCartney was doing with the remnants of Nirvana at the 12.12.12 show, as that track appears here.

Unfortunately, one crucial bit is missing from the project's plan.  I guess it was assumed that with the talent gathered, and the gear being used, great music would follow.  Well, the muse didn't play along.  For the most part, these aren't special songs.  They are forced attempts at moving forward with an idea, because they have to, there's a need to get it done, and fast.  The McCartney song is a perfect example.  The lyrics are just trite lines that you throw out to fill a hole.  The music amounts to them all deciding to play something heavy, but with no melody.  It's lame.  Sometimes there are sparks of something, such as the Stevie Nicks number You Can't Fix This, which almost has a story that makes sense, and Nicks sounds pretty interesting with a harder group behind her (the Foo Fighters).  Reznor, Homme and Grohl team up for the final, and best cut on the disc, Mantra, which has some subtlety to it, not just an exercise in recording volume.  But really, if what I hear about the film is correct, that it is a very good documentary, then this album won't come close to doing it justice.
Posted by Bob Mersereau at 9:56 PM