MUSIC REVIEW OF THE DAY: MADELEINE PEYROUX - THE BLUE ROOM 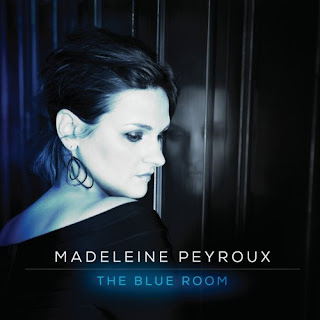 Peyroux's been on a roll, and becoming one of top jazz vocalists of the day, but this one kinda weirds me out.  It's designed to be an update of Ray Charles' famous genre-bending Modern Sounds In Country and Western Music, a huge hit that turned around everyone's idea of what country could be back in 1962.  Produced and designed by the noted Larry Klein (Joni Mitchell, etc.), some of Ray's covers are included, as well as a new batch of covers that update the idea of adding jazz and soul and strings to country-ish material.

My biggest problem with some of the songs is that with her particular drawl, getting behind the notes, and the lusher strings Klein adds, it takes on a lounge feel.  The slower version of The Everly's Bye Bye Love sounds like a Burl Ives or Eddy Arnold version, with none of the original track's spriteliness.  All the older numbers, from Take These Chains From My Heart to You Don't Know Me, are too laid-back, even with the quality of all the voices, arrangement and players.

Better are the newer songs chosen to update the Charles idea.  They are all familiar, but these are very interesting takes on them, and since they aren't numbers that have been covered all that often, they are more fresh.  Gentle On My Mind takes on a sadder town, and she's right, it is a more serious number than the good-time Glen Campbell version.  Bird On A Wire works very well, thanks to a great string arrangement, and her best vocal on the disc.  The killer though, and the song that made me reconsider what I was hearing, is Warren Zevon's Desperadoes Under The Eaves, which closes the disc.  Her haunted take is perfect for this impeccable song, and since it's set in a sleazy bar, Peyroux's voice fits perfectly, three cocktails too many.  So I'm split down the middle on this one.
Posted by Bob Mersereau at 8:47 AM