MUSIC REVIEW OF THE DAY: MOTOWN THE MUSICAL - CLASSIC SONGS THAT INSPIRED THE BROADWAY SHOW 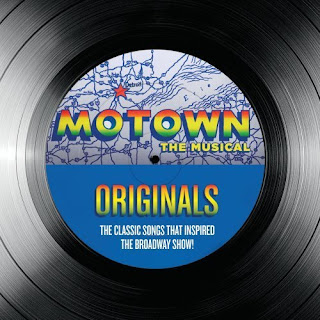 It's shocking it took this long for the Motown story to be made into a Broadway show, but it's in previews now, no doubt about to become the next smash and run for ten years.  Of course, Motown itself never passes up an opportunity to release a tie-in best-of, once again putting together a collection of perhaps the most reissued music of all time.

This two-disc set is awfully good of course, as it's a 40-track waltz through the great hits of the 60's and 70's.  And even at that, it contains only a fraction of the songs that could have been used.  It's heavy on The Supremes and Diana Ross solo, and stays mostly with the biggest stars:  Stevie Wonder, Marvin Gaye, Four Tops, Smokey with and without The Miracles.  I played a game, where I didn't look at the track list before, and had to see how fast I could name each tune.  It's pretty easy when it goes:  You've Really Got A Hold On Me, Do You Love Me, My Guy, Where Did Our Love Go, Stop! In The Name Of Love.

Really, the only question here is, do you own a good Motown collection already?  If not, this will do nicely.  Except it should include a front-cover sticker that says:  Warning!  Includes All Night Long by Lionel Ritchie.
Posted by Bob Mersereau at 3:59 PM