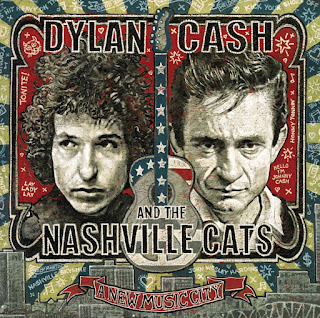 Released in connection with an exhibition at the Country Music Hall of Fame and Museum in Nashville, this set celebrates the sidemen of Music City in the '60's and '70's. The reason Dylan and Cash are in the title is that they helped usher in a new attitude about the country music capitol. Dylan started recording there in 1966, using local talent, and Cash championed Dylan and rock, especially on his Nashville-recorded TV show.


The 2-CD is deep in major recordings, some rarely thought of as Nashville productions. There's Leonard Cohen's Bird On A Wire, at a time when he lived in the city for two years. Simon and Garfunkel did The Boxer there, the famous bass harmonica part courtesy of multi-instrumentalist Charlie McCoy. Even The Beatles got involved, solo at least. Harrison flew pedal steel whiz Pete Drake in to record Behind That Locked Door, because he loved his work on Dylan albums. Ringo met Drake then, and went to Nashville to have him produce his Beaucoups of Blues album. McCartney arrived in '73 to make Sally G.


It's the long tentacles of Dylan that really changed rock music's attitudes towards country. Ian and Sylvia moved to Nashville because their friend had done so well there, and recorded his tune This Wheel's On Fire, and a couple of albums. Flatt and Scruggs did another Basement Tapes number, Down in the Flood. The Byrds always followed Dylan, and arrived in 1968 to make Sweetheart of the Rodeo, with yet another Basement Tapes tune, You Ain't Going Nowhere, plus Gram Parsons' sublime Hickory Wind. Best of all for Dylan fans is a previously-unreleased cut featured here, a version of If Not For You, featured Nashville-added pedal steel and violin.


One of the most successful rock-to-Nashville visits features Neil Young, in town to appear on the Cash TV show. Offered some studio time, he hooked up with local players and was so taken with them, he made much of Harvest album in town, including his enduring Heart of Gold. He also took session stars Ben Keith, Kenny Buttrey, and Tim Drummond with him to form the Stray Gators. Those players, as well as McCoy, Drake, Charlie Daniels, Pig Robbins, Fred Carter Jr. David Briggs, Norbert Putnam and several others are the Nashville equivalent of L.A.'s Wrecking Crew or Motown's Funk Brothers, and just as important to country and rock. And this is a grade A collection, well worthy of being a museum piece.
Posted by Bob Mersereau at 9:50 PM