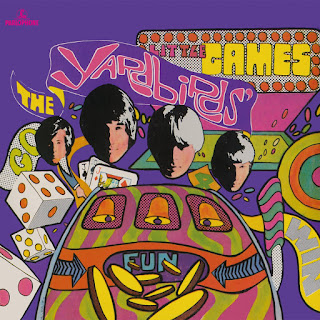 Listen to the instrumental break in Tinker, Tailor, Soldier, Sailor. That odd guitar scraping, could it be? Yes, there it is, the fabled first time Jimmy Page played his electric with a bow! Actually, it's not all that excited, but that's pretty much what this album has always been, a kind of muddled in-between collection of cuts as The Yardbirds were changing and dissolving, forcing Page towards new efforts in Led Zeppelin.


Here's a vinyl reissue of the last Yardbirds album, a very nicely presented product in splattered-colour vinyl, and a heavyweight pressing. Little Games saw the band down to a four-piece after Jeff Beck got the boot for being mysteriously ill too often on tour. Despite the entire rock world knowing that psychedelic, progressive albums were the thing for 1967, The Yardbirds were being forced to keep trying for hit singles, with Mickie Most (Herman's Hermits) brought in as producer. So the album was recorded in mere hours over three days, compared to the months the group's contemporaries were spending in the studio.


Even then, the singles stiffed, probably because they were lightweight. Listen to the words on Little Games, they don't match the psychedelic blues the group was trying to do, lead by Page's guitar tricks. There are valiant efforts here, on the non-single tracks, mostly hinting at where the members would head after dissolution. There are some folk moments, Keith Relf singing Only The Black Rose, before he would move on to Renaissance with drummer Jim McCarty. And of course Page was borrowing blues and folk for his new sounds, Drinking Muddy Water the kind of song that Zeppelin would be all about in a couple of years.


It's actually a sad end to The Yardbirds, a band that never truly jelled despite its famous members. There are good songs here, but a couple of clunkers too, and the band deserved to be left along for some time to create something great. With its many Zeppelin hints (John Paul Jones even plays as a session musician), it's a needed link in the chain.
Posted by Bob Mersereau at 8:39 PM