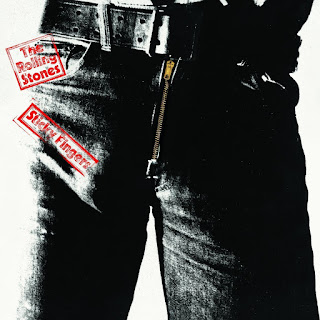 I've already reviewed the recent deluxe, 2-CD reissue of the Stones' glorious 1971 release, Sticky Fingers, but I'd been hearing that the Super Deluxe version was a top-notch one. These Super Deluxe boxes are tricky things. They are designed for bigger fans of the band, and music collectors, those willing to shell out $100 - $200 bucks. Sometimes, all you are really buying is nicer packaging and some minor novelty recordings, and basic fans can get all the music needed on far cheaper editions. But other times, you get what you pay for; the recent Dylan Basement Tapes big box features six CD's of music instead of the two in the regular set.


The Stones have had a so-so record with box sets. While they are always quite special in the packaging department, often they fall flat when it comes to actual content. The huge Grrr! box was big in size at about 18 inches tall, and included the first-ever Stones demos, plus a vinyl EP of a BBC session. But at $200, that was still just 4 discs of the same hits, and the pretty book was mostly photo reproductions of various promotional materials such as posters and trinkets, with no text. The Exile On Main Street box was just the 2 CD deluxe set version, the two-album vinyl set, and the DVD of Stones in Exile, which you could buy for 10 bucks separately.


So I'm happy to report that the Sticky Finger Super Deluxe is real value for the dollar, if you have enough of them. First, there's a live CD that's only available in this package, a 1971 concert from Leeds University in London. Some of it was released before, but not legally. There was a famous bootleg called Get Yer Leeds Lungs Out, named for a line spoken by Jagger at the show. Here we get the complete concert recording, and of course in much better sound. There is a DVD included as well, but don't pay much attention to that. It's only two cuts, and they are taken from this week's full release of The Marquee Club Live in 1971, which you will want to get on its own.


As for the package, this time the book not only looks great, it actually has excellent notes and photos as well. I'm not a Stones nut, but I'm pretty knowledgeable, and there are some stories here that are new to me. I didn't know Can't You Hear Me Knockin' came out of a one-take only improv. Also, the bonus track version of Brown Sugar, with Eric Clapton on guitar, happened not as an out-take but rather an after-party jam with the band pal. It looks great, the paper is the highest quality glossy art-book stuff, you get a bonus 45 of Brown Sugar/Wild Horses with a sleeve reproduction, posters and such, and of course, a working Warhol zipper. That's super, and deluxe.
Posted by Bob Mersereau at 8:47 PM