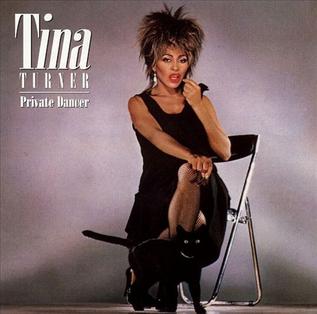 The most famous legs in r'n'b were walking the comeback trail back in 1984.  Turner hadn't made an album in five years, and had never really been a solo star.  Having escaped the abusive marriage with Ike Turner, she went back to basics, hitting the road and getting a new image for the MTV era.  A cover of Al Green's Let's Stay Together did well in the U.K. in 1983, and a management/production team put together a plan of attack that brought her more fame and acclaim than ever before.

The comeback album featured the huge, #1 hit What's Love Got To Do With It, the decent follow-up Better Be Good To Me, and the kinda okay title cut, written by Mark Knopfler.  Turner could make anything sound good, but thirty years later, it's surprising how, umm, '80's this sounds, with overwrought synths, shrill production and odd song choices.  A slowed-down version of Help?  Bowie's 1984 at least had the right year for the project, but it's one of his worst clunkers.  The album proper is saved by the hits, but the other tracks drag it down.

Thankfully, it's made much better in this 30th anniversary edition.  When you put all the b-sides, remixes and live tracks back-to-back on Disc Two, it's far better than the original Private Dancer album.  Cuts such as I Wrote A Letter, Rock 'n' Roll Widow and Keep Your Hands Off My Baby should have been on the proper album.  Then you get her concert duets with Bowie (Tonight) and Bryan Adams (It's Only Love), highlighting her tremendous stage presence.  I'm not a huge fan of the Mad Max theme We Don't Need Another Hero, but it's here too.  Good job, deluxe set-makers.
Posted by Bob Mersereau at 2:32 PM