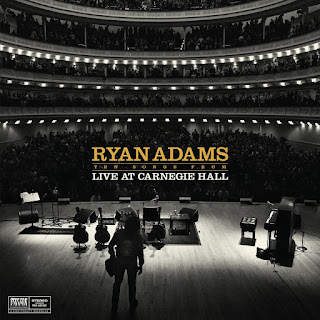 Ryan Adams' loyal fan base really came through when the singer released a limited-edition 6-LP box set in April. Featuring 42 songs recorded during a run last November at Carnegie Hal, the collection sold out not one but two pressings. Now it's being widely issued next week, plus for the more frail consumer, there's this handy 10-song CD, as a strong sampler of the set.


I haven't heard the big box, but this live album sure hits all the right buttons. It's totally solo, just Adams on guitar or piano, up there alone, kind of goofy and charming, and with those killer heartbreak tunes. For years now Adams has surrounded himself with various bands, but as this concert shows, he's at his best stripped bare, where all that aching and fragility is on display. Not that he can't do rock numbers, but at that game he's merely highly talented. As you'll hear on this disc, it's a fully captivating set.


The disc also sounds wonderfully intimate. Maybe it's the acoustics at Carnegie Hall, and maybe it's the care that went into the recording, probably some of both. It makes this even more of a treat. The songs chosen for this edited version are heavy on his first two, most popular albums, Heartbreaker and Gold. Then you get three from the current, self-titled album, and two new ones. Instead of being the grump he has been in the past, instead he pours his heart into the old ones. Why the crowd doesn't go crazy when he does New York, New York shows how cool the locals can be, but by the time he hits Come Pick Me Up, every soul has been won over. Six albums at over a hundred bucks might be too much for some, but this will do nicely for any one, the big fan or the more casual.
Posted by Bob Mersereau at 5:24 PM