MUSIC REVIEW OF THE DAY: NEIL YOUNG & PROMISE OF THE REAL - THE MONSANTO YEARS 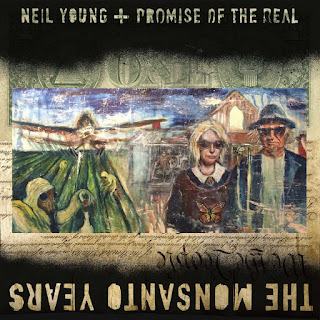 There is probably a team of lawyers working overtime for Monsanto and Starbucks, pouring over the lyrics here, asking "Can he say that?" As usual, Young pulls no punches here, delivering several songs directly attacking the corporate giants. And as usual, with his diatribe-based albums, it's a chore getting through the lyrics. He's not even trying to make them rhyme, and considers his message more important than our enjoyment. I'm certainly not going to argue with his views, or his willingness to use his star status for causes, but there's not a drop of subtlety and not much skill in this words.


As for the music, that's a different story. This is the most inspired I've heard Young in years, thanks to the new band on board. Promise of the Real feature two of Willie Nelson's kids, so they had an in with the boss already. And it didn't hurt that they took their name from a line in Young's song Walk On, "sooner or later it all gets real". While they may pray at Young's alter, the young folks add a spark, and a few chords not usually in Neil's charts. There's a conga player in the group, lots of interesting harmonies, and even new lead guitar playing.


Young and the Real mix it up nicely, between full-on rockers, mid-tempo grooves and a couple of nicer, dreamy numbers. But you really do have to tune out the singing, especially when he turns on the audience. People Want To Hear About Love is a shot at music fans who don't want to hear about corporations and dying fish and pesticides, just love songs. You know what Neil? I'd be fine hearing a protest song where the words weren't tossed off in five minutes.
Posted by Bob Mersereau at 10:37 PM