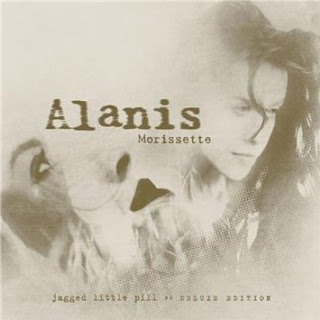 Landmark music for sure, and it is impossible to deny its successes, no matter what you have thought of the songs or the artist over the 20 years since this was released. There's the sales marks of course, the multi-millions of CD's, the records for the biggest-selling debut album and biggest-selling female album ever. But more importantly, it spoke to and for a generation of young people, especially women, in a way no-one had before. As Morissette sums it up in the strong essay included here, "..the true experience of being a young, sensitive, and brave person in a patriarchal world." And she kicked butt doing it.

Sporting a lively new remaster, the very familiar tunes are repackaged here with the aforementioned booklet essay, plus a second disc of pretty impressive previously-unreleased material. These are ten demos from that period, none of which have appeared before or became something else. All but one were written with her producer and co-conspirator Glen Ballard, and date from the very first song they wrote together to some weary works that came out after she got off the road from the exhausting tour for Jagged Little Pill.

Like the rest of her songs at that time, these are personal and cathartic numbers, where she examines how she's feeling, what she wants, what is of great concern. With Ballard involved, these demos are certainly not acoustic guitars and voice. These are pretty close to finished products, even including strings on one song. In effect, it's Jagged Little Pill 1.5.

Best tracks include The Bottom Line, that first song they wrote, in the first hour of meeting. At this point, Ballard was still contributing some lyrics, although by Jagged Little Pill. she had taken over all the words, while they shared the music composition. Superstar Wonderful Weirdos is a look at the freak show she had joined, able to stand outside and observe people's perceptions of her. No Avalon is another one with Ballard contributing lyrics, wondering if there's a heaven. King of Intimidation is another whack at jerks in the entertainment game, written after Jagged Little Pill, a good continuation of the theme. Death of Cinderella is a final goodbye to the pop princess we Canadians knew back in her dance days.

Here's the thing though; does anyone still listen to Jagged Little Pill? It was so ubiquitous, and so of its time, that it's not something you go back to, nor is it something new generations pick up on. Twenty years has gone by, and there doesn't seem to be a need for its heroic qualities anymore. Morissette broke down the barriers, and lots of women followed with lots of attitude. But it might be another few years before her songs find a fresh audience. The two-disc set is nicely priced at around $15, while a 4-CD box includes a live concert from the original album tour, and a reissue of the 2005 acoustic re-recording of the original album.
Posted by Bob Mersereau at 8:55 PM