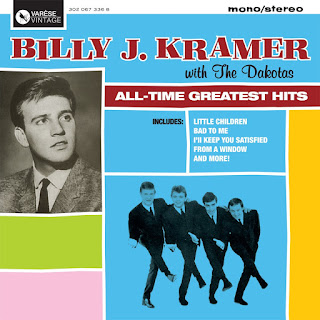 Before The Beatles, Liverpool was considered a musical backwater by the British music world. But such was the overwhelming success of the band, most of the rest of the city's scene was soon following the Fabs up the chart, many of them thanks to the same team. Billy J. Kramer was a colleague of the band, having played lots of gigs with them pre-fame. He also caught the attention of Brian Epstein, who became his manager, and opened the doors to the kingdom.


The burgeoning songwriting team of Lennon & McCartney were so popular, any of their songs could have been hits. Catchy numbers were being left as album tracks, so some of them were handed around to other acts on the team. Kramer got to record several, with the tracks produced by George Martin. The more Lennon & McCartney wrote, the more extra songs were unused as well, so there were a couple of their compositions only heard as Kramer numbers.


Kramer was able to take Bad To Me into the Top Ten, not a bad Lennon cut, but you can hear why he wasn't worried about handing it over. I Call Your Name was better, and the group did eventually cut that one, after Billy's version. In all, seven of the 14 cuts here are Beatle-written numbers.


But Kramer did prove himself outside the comfort zone of Epstein's empire. His best number and most enduring song is a Mort Shuman number he picked up on, Little Children. It doesn't sound at all like The Beatles, and has a maturity most pop hits of the day didn't, at least in the melody and arrangement. Kramer ran out of steam in 1965, and future plans were curtailed when Epstein died, but he had a solid run in the British Invasion.
Posted by Bob Mersereau at 3:49 PM