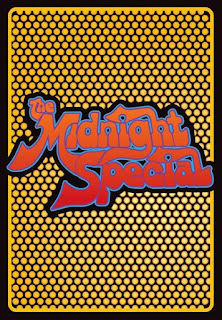 This is an expanded boxed set of DVD's from the iconic '70's music show, now coming in at a whopping 11 discs. Midnight Special was hugely important at a pre-MTV time when you could barely find music on television. Don Kirshner's Rock Concert had the harder stuff, Saturday Night Live would give you two songs once a week by somebody cool, and Midnight Special was Top 40.


Considering the late-night time slot, they did play it safe and often, lame. With bland hosts such as Helen Reddy and the Captain & Tennille, plus the horrifically bad links taped by Wolfman Jack, you could go entire shows without leaving the middle of the road. It's actually quite hilarious how bad it can be, as you watch Barry Manilow trying to bust a move on It's A Miracle (worst.dancer.ever.), and if you want to shock your kids, show them the sad scene of Rick Dees and a cast of musicians with no self-respect miming to Disco Duck.


But here's the flip-side of '70's TV: on the same disc, you can also find a one-time-only, historic performance featuring host George Benson, at the time the respected jazz guitarist had mellowed out for the Top 40 hit Breezin'. Instead of bringing in the usual guests that week, it was a superstar jam session, no lip-sync, no backing tracks, all live, with Carlos Santana, Tom Scott, Dr. John, Etta James and, of all people, the no-nonsense Van Morrison. Seeing this bunch all on stage for Moondance is worth wading through the KC and the Sunshine Band and Village People moments.


Great costumes though; from Labelle's space suits to Jim Croce's 'stash, the era was all about big. No band performed without some member shirtless. The knitted sling/halter thing that Aretha Franklin was wearing was outrageous and frankly distracting, but what a performance.


And so it goes, from incredible to okay to laughingly bad. On the big, big plus side, you get The Kinks, Steely Dan, Tom Petty, and a brilliant Love Train from the O'Jays. You'll zone out through REO Speedwagon, and find yourself debating the merits of John Denver.


This expanded set also adds a disc of stand-up comedy, a very different beast in those days, when comics where being treated like rock stars, and still on tour with them too. Maybe its just generational, but I'll stack this line-up against today's supposed funny people: Richard Pryor, Steve Martin, Robert Klein, Andy Kaufman, George Carlin, the young Billy Crystal, vets Flip Wilson and Redd Foxx, and even Jimmie J.J. Walker. Normally I'm just about the music, but this is welcome.


The major problem with the set is the hugely-annoying way they have compiled the clips. They create mini-versions of shows, featuring the opening and closing credits, and host links between each song, and then three or four cuts, before moving on to the next mini-show. So you get the Midnight Special theme everytime, the lameness of Reddy or Wolfman every time, the credits for technicians every time, all of which break up the enjoyment and quite simply waste everyone's time. Oh, to be allowed to edit all this out, and add in more great songs, but it's probably all been done for financial reasons, filling out the discs with free stuff, rather than having to pay royalties for more songs. But over 11 discs, there is a ton of excellent viewing, and if you have a sense of humour about certain acts, it's even better.
Posted by Bob Mersereau at 8:33 AM