MUSIC REVIEW OF THE DAY: THE EAST POINTERS - SECRET VICTORY 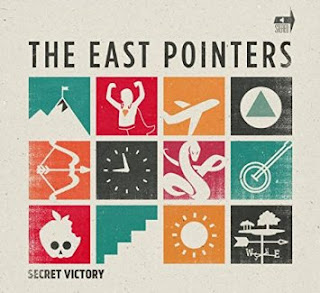 Never, ever make the mistake of thinking East Coast trad is treading water. Wave after wave of new players hit the shores, each one shifting the sands, changing the shape of the sound in their own way. Highest tides in the world, you know, we're used to rocking the boat.


The latest band to storm the beaches comes out of P.E.I., an acoustic power trio, The East Pointers. Well, the Maritimes version of a power trio, with a guitar yes, but also a fiddle and a banjo. There's still lots of power in that, when you have banjo and fiddle trading licks, weaving around the driving guitar chords, and pounding footsteps as percussion. The players in the group aren't new to the scene, three long-time pals who knew they'd make a mark if they teamed up. Tim Chiasson has been wowing folk and country fans with his golden voice and tender lyrics on his solo albums, plus as fans know, he's a killer fiddler as well. When he wasn't fishing professionally for lobster (seriously, it is P.E.I.), Koady Chiasson, was playing bass in cousin Tim's band. Thing is, he's also a brilliant hand at the banjo. On guitar is Jake Charron, a much in-demand instrumentalist whose last release, a duo album with Shane Cook called Head to Head, was nominated for a Canadian Folk Music Award. We're talking a P.E.I. supergroup, then.


With a singer like Tim C. on board, you're not going to keep him silent, and three new vocal cuts are on the album, written by the band. The rest of the ten cuts are instrumental, but these aren't numbers out of the Celtic College playbook. The members are all composers, and have brought their own melodies and licks to the project. Medleys move from one writer's work to another duo or trio composition seamlessly. It sounds old and new all at once, the members playing the way they were taught in kitchens and town halls, but adding in more modern melodies and a touch of deft production as well.


Then there are those vocal tracks, adding not just another mood, but a really a hands-down showstopper each time. The cut Cold just aches, Chiasson adding an extra tug of sadness, his cousin and Charron harmonizing, the backing a kind of mournful bluegrass jazz.


The group is finishing up a few Ontario dates this week, with a show in Ottawa Wednesday, Nov. 18 at Live On Elgin, another Thursday in Toronto at Hugh's Room, the London Music Club on Friday, and The Livery in Goderich on the 21st.
Posted by Bob Mersereau at 8:16 PM