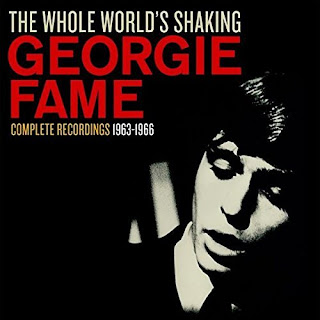 Not everybody on the scene in England in the '60's made it over the ocean in the British Invasion. For every Gerry and the Pacemakers that did top the charts and come over to tour, back in Blighty there was a Dave Dee, Dozy, Beaky, Mick & Tich that couldn't make the journey.  Considering the quality of their hits such as Zabadak!, maybe we didn't need them all landing on these shores.

We could have used more Georgie Fame though.  One of the key players of Swingin' London, Fame scored just two well-known cuts this side of the ocean, his ultra-hip take on Yeh, Yeh in 1964, and the surprise novelty hit The Ballad of Bonnie & Clyde from 1967.  But there's a treasure trove of music in between, as featured on this handsome box set.

It's comprised of five CD's, including the four albums Fame made during this four-year span, plus a fifth of rare cuts, demos and out-takes.  Plus, each original album is nearly doubled in size (disc one is more than doubled) by the addition of single and E.P. cuts, alternates and the like. It's meant to be a collector's package, with a hard-bound book, a large poster and several postcards included as well.

Fame's first album showcased what he and the band did well, entertain the club-goers each night with high-energy R 'n' B, centered around Fame's organ playing. He'd picked up on the Hammond organ sound of Booker T and the MG's from U.S. servicemen who used to drop by his gigs and play him records they'd brought from home.  Fame developed his own take on cool jazz, soul and blues, leading a tight band complete with horns. The album Rhythm and Blues at The Flamingo sees the band in full, locked-in groove, making the party happen with James Brown and Motown cuts, working in a little Mose Allison, and playing favourites like Let The Good Times Roll.  You can hear the fans having a ball, and you can picture Austin Powers strolling in, shouting 'Ya baby.' The plentiful bonus cuts here include several sessions for the BBC, more good-time numbers, and a rare bit of history, as Long John Baldry joins the group to take the vocals on You're Breaking My Heart.

Disc two is the best of the bunch.  Fame had by this time developed his own sound, relying less on well-known artists and more on his own blend of influences.  There were still lots of well-known covers on the album Fame At Last, including Marvin Gaye's Pride and Joy, Gimme That Wine by Lambert, Hendricks & Ross, and his own version of Green Onions, but the mix of all these influences combined with the freedom of London's music scene at the time really gives his music energy. But oh, those bonus tracks, that takes his disc over the top.  First, you get Yeh, Yeh, a non-album single track, always a killer tune. And it's the home to quite an amazing musical moment.  Fame was one of the very first artists to pick up on a new sound coming out of Jamaica.  Ska music was popular in the Jamaican areas of London, and Fame recording an EP called Rhythm & Blue-beat, adding yet another element to his set.  Hearing him incorporate the classic inverted rhythm into his energetic style, so far ahead of the rest of his peers, is pretty mind-blowing now, one of those things I wish I'd known about 30 years ago.

Disc three saw Fame head a little more in the hits direction, with a greater emphasis on radio-friendly, concise songs, and less of the R 'n' B style.  The album was called Sweet Things, the fare was along that line, with a version of My Girl, a ballad in Funny How Time Slips Away, and a cover of Dobie Gray's The In Crowd.  The hoped-for follow-up smash to Yeh, Yeh didn't happen, but there were decent-sized hits with In The Meantime, Like We Used To Be and Something, all of which are featured in the bonus tracks here.

Disc four was a big departure for an album called Sound Venture.  Here Fame was paired up with The Harry South Big Band, and took on the role of crooner.  It's not his crowning achievement.  Fame was a singer who had a lot of feel, but not a great tone or range.  The rougher the music got, the better, but here he's a little out of his comfort zone, or at least ours.  Really, the whole thing was a mis-fire, as the band is about a decade behind the times, or perhaps 40 years too early; but Fame did not become the Buble of the day.  The bonus cuts are better because we're back to regular fare, including the British #1 Get Away, and the sizable hit version of Bobbie Hebb's Sunny.

Disc five is a relief from the big band sound, as we go to the rare cuts collection.  It features a mix of pretty much all the sounds heard in the other sets, on radio sessions, some alternate takes, and a few that didn't sneak out along the way.  Best is another of the ska tracks, Tan Tan's Tune, while the awfully racist Black Head Chinaman would be good if it wasn't ...you know.  But I told you it felt like Austin Powers was in the room.  For those who like to make discoveries and don't mind laying out a few bucks, this is a rewarding addition to the wall o' sound.

Posted by Bob Mersereau at 5:03 PM