MUSIC REVIEW OF THE DAY: THE BEATLES - 1+ 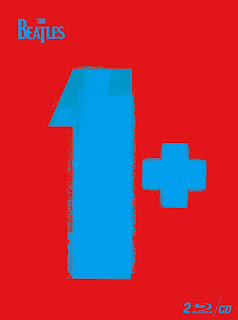 The Beatles used to send out Christmas singles to their fan club members in the '60's; they are still providing a present each Christmas season, with a major reissue guaranteed to get fans reaching for their Visa cards. This year sees an especially nice one, an expanded issue of the best-of, Beatles 1.


Now, we all have the music, and that's not the point here. What you get is a video to accompany each song. And please, no ho-humming that detail. Video clips from the band haven't been readily available to purchase like most other groups. You got bits and pieces in The Beatles Anthology and the movies, but no full collection, so this is the one area of Beatledom that has actually been under-serviced to the audience (and under-exploited by Apple).


None of this would be exciting if the clips were average, but The Beatles were ground-breakers in that field as well. It's been argued they created the rock video, thanks to the several films they made in their heyday out of necessity. There were so many requests for their appearances all over the world, that it was figured the best thing to do was make films of them performing the new singles, and send them out to TV shows, movie theatres, whoever would play them. Even Ed Sullivan had to make do sometimes with these films. Later, when the group stopped performing live, they became even more important for fans dying to see the group in person.


Each of the 27 tracks from the 1 album is matched by a corresponding video. However, not every one of them had one of these specially-made videos in the first place, so the remainders have come from a variety of sources. There are TV show appearances, live concert bits, some of them older, some of them made up well after The Beatles split. The one for Come Together is an animated piece done in 2000 for the launch of the beatles.com website, and is really quite a dull bit. But its a rare failure. The Love Me Do clip is brand-new, a skillful 2015 edit using a partially-surviving live performance film from 1963. From Me To You is the famous Royal Variety Performance from that same year.


As important as those historical documents are, it's what The Beatles did without an audience that really impresses. Faced with the task of recording promotional films, and not just standing there miming to the backing tracks, the boys did what they did best, and relied on their chemistry, wit and charm. For I Feel Fine, they got up to Beatle hijinks. While John and George played it cool and laughed a little, George started singing into a punching bag set up like a microphone. Meanwhile Ringo, at first nowhere to be seen, sprints on and sits on an exercise bike, set up where the drums would normally be, and peddles away. It's simple and awesome.


Help! sees them sitting in a straight row facing the camera, John at the front singing. The others poke their heads out, around John's to sing a harmony line or just get on camera. Ringo, inexplicably, is holding an umbrella, and just starting at us. It's riveting. Oh, then it starts snowing indoors, and Ringo stays dry.


The technical work is tremendous, with the original films cleaned up in amazing details, for pictures and sound. The colours leap out once the black and white days end, Paperback Writer positive sparkling. The audio work continues on the companion CD as well, this new version of 1 now sporting the latest stereo remixes.


This is one where I'd advice seriously looking at the deluxe version, even with the added price. It's called 1+, and features an entire second disc of videos. There are so many important ones here, including the famous clip for Strawberry Fields Forever, not a #1 hit so not included on the first disc. It's my favourite, trippy, a little scary and very much a piece straight out of London of the time, with the shell of a piano looking like its melting on acid. Take that, Pink Floyd. By luck, a film crew was sent to follow the group on the day they happened to be recording Hey Bulldog, so there's actual footage of the real performance for the record. And there's two different takes of the Hello Goodbye video, this time with the band doing more goofy stuff, Lennon acting like Elvis, and them wearing street clothes instead of the Sgt. Pepper outfits.


Other bonuses include a hard-bound book with notes and sources for each video on both discs. There are also commentaries on a handful of tracks by McCartney and Starr, but those are disappointments across the board. Both have long ago run out of stories about the songs, and struggle to think of what to say. Plus, there's nobody to say 'That sucked Ringo, do it again.'


So, get it, and if you can, get the expensive one. The deluxe limited edition of 1+ is selling for $70.00 for the blu-ray edition, and $60.00 on DVD, while you can get various editions featuring just the DVD or blu-ray, or the CD/DVD or CD/blu-ray combos, in the $20 to $35 range. There's even a new double LP available. Pick the option that works best for you.
Posted by Bob Mersereau at 9:50 PM