MUSIC REVIEW OF THE DAY: LORI YATES - SWEETHEART OF THE VALLEY 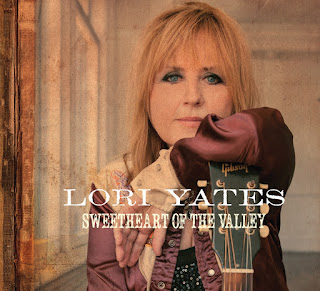 Yates has had quite a career, and you can hear about some of the most interesting parts on this grand alt-country outing, a career highlight. It's her first since 2007's The Book Of Minerva, and a big reminder that she's one of the country's best singers and writers.


Out of the same Toronto cowpunk scene that coalesced around Handsome Ned. Blue Rodeo and Cowboy Junkies, Yates was lead singer for Rang Tango, and swept up to Nashville, Sony Music there looking (rightly) for the next big thing. The conservative town never likes rebels, and after a debut solo album, Yates was back in Canada for a couple of albums for Virgin in the '90's. Next came the sorta-supergroup Hey Stella!, with ace roots guitarist producer David Gavan Baxter, Prairie Oyster drummer Michelle Josef, and Blue Rodeo's Bazil Donovan for an album in the 2001's. She's also become an integral part of the powerful Hamilton music scene.


A gifted storyteller, Yates offers a mix of cautionary tales, life lessons and colourful people and places. Hamilton's full of them you know, and several show up in Corktown, a number about the legendary tavern (Canada's oldest), where you have to prove yourself, something Yates certainly did. Trouble In The Country is about the situation Yates found herself in arriving in Nashville, especially a run-in with the famous producer Billy Sherrill.


Oh, back to Hey Stella!, the band got back together for this one, and they sparkle throughout, with tasty licks from Baxter and a solid country groove to match Yates' natural twang. There's still lots of the punk in her as well. She might be a sweetheart, but she'll kick your ass too. It's a kick-ass record in fact.
Posted by Bob Mersereau at 5:07 AM