MUSIC REVIEW OF THE DAY: CILLA BLACK - THE HIT SINGLES 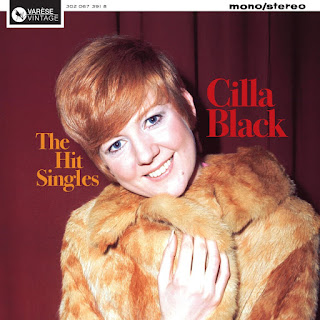 Cilla Black passed away back in August, barely causing a ripple in the Twitterverse, no great outpouring of grief and nostalgia on Facebook. In the great British Invasion, somehow Cilla only managed a single Top 40 hit, the dramatic You're My World. But in England, she was a huge star of song and TV, with back-to-back number one hits, 17 Top 40 numbers, a long-running variety show, and was the second-most successful client of Brian Epstein, next to you-know-who.


Black wan't riding on her friend's coattails either. She was well-known in Liverpool, pre-1963, getting up onstage and doing sets with most of the local top acts. Famously, she was a coat-check girl at The Cavern, but her pal Lennon was already calling "Cyril" on-stage to sing a number with the band before then. Epstein envisioned her as more sophisticated than the pop bands, and she did have hits with Randy Newman and Bacharach/David cuts, Alfie being written specifically for her, not Dionne Warwick. Newman's I've Been Wrong Before is tragic and beautiful, with a highly-original chord progression in the melody.


Then there are those pals; like others in the Epstein management circle, she got the support of producer George Martin, and the songs of Lennon-McCartney. Love of the Loved was the first, an old Cavern number they'd discarded. It's For You was okay, good enough to make the British Top 10 in the glory year of 1964. There's a great little message from Lennon included on this set, where he says grand things about Black for the benefit of fans and disc jockeys. Best of all was a McCartney number written for a TV show she was in, 1968's Step Inside Love, quite a different style for the Beatle, and another hit overseas.


Black had a grand voice, and was a charmer, much-loved over her career, known always as "Our Cilla". Given that Freddie & the Dreamers managed four Top 40 hits in the U.S., and Peter and Gordon had ten, it's quite a shock that Cilla Black wasn't more accepted.
Posted by Bob Mersereau at 8:08 PM