MUSIC REVIEW OF THE DAY: THE SCENICS - IN THE SUMMER 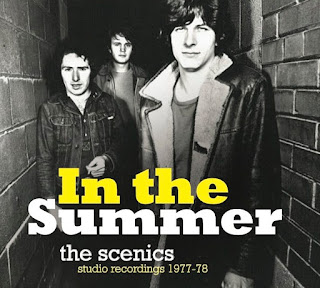 Here are more great lost songs from vintage Toronto punk-popsters The Scenics. One of the lesser-known, but no lesser-talented gangs of the original scene, the trio were at the bill at the infamous Last Pogo in 1978, opened for like-minded Talking Heads, but most importantly, recorded all their stuff, leaving a legacy. This is the second recent set of archival recordings from the crucial 1977-78 period, sounding fresh as a daisy. Umm, an abstract daisy with electronic eyes coming out of it, but fresh still.

Mavericks they were, and obviously quite excited that strange things were happening nearby in NYC. At this period in their career, the influences are easy to spot, going back to the Velvet Underground and au curaunt with Talking Heads. The Scenics would also develop nicely as well, seeing the limitations of punk and embracing the art rock of New Wave. An album, Underneath The Door, did arrive in 1979, but these studio tracks are plenty polished enough for full release, and far surpass many of the supposed key records of that period, from Toronto and the other punk capitols.

Twitchy and angular, the band was making up chord combinations and vocal intonations, sounds that weren't supposed to be pretty but certainly were once you had ears to hear. The title cut has all the swagger of Sweet Jane, the beauty of The Byrds vocals on the chorus, and a mad scientist singing lead everywhere else. Great Piles of Leaves is about a fish-out-of-water kid who really just wants to play cello like Pablo Casals, and Wild Trout is just about a fish. And it rocks. Meanwhile, the Juno Award for Best Selling Album in 1978 went to Dan Hill for Longer Fuse. Just sayin'.
Posted by Bob Mersereau at 8:32 PM