MUSIC REVIEW OF THE DAY: THE ROLLING STONES - LIVE AT THE TOKYO DOME 1990 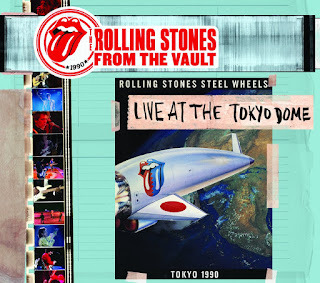 What a difference eight years made in The Rolling Stones. Watching this back-to-back with 1982's Leeds concert (see last review), then it was still basically a rock show, the core band with a a couple of sidemen. By 1990, the technical improvements were huge, and the extra musicians outnumbered the official Stones ten to five. The set was gigantic, and it was a spectacle more than a music event. They had truly become a rock and roll circus.


What all this sound reinforcement meant was that the Stones were part of a performance rather than the whole show. Each night was going to be the same by and large, the only real differences night to night being Mick's energy and moves, and Keith and Ronnie's playing quality. Rough edges such as Keith's shaky vocals didn't matter, because the melody was handled by three professional singers behind him, so his grizzled harmonies were colourful rather than essential. Huge arrangements featuring five horns and two keyboards pushed the set along and all those tens of thousands under the Tokyo Dome were going to walk out thinking they'd seen the biggest and the best.


The group would learn to do these shows better on future tours. On 1989-90's jaunt, they were still trying to sell the current album, Steel Wheels, trusting in their old songwriting magic. So there are some pretty dull moments as we are made to sit through Sad Sad Sad (does anybody remember that song?) and Almost Hear You Sigh. Rock and a Hard Place and Mixed Emotions are better, because they are bigger, brass and backing vocalists again, and a very un-Stones-like glossiness.


Much was made during the tour of the inclusion of some long-ignored older songs in the set list. Ruby Tuesday and Paint It Black are lots of fun to hear again, and so refreshing amidst the set of the usual suspects (Satisfaction, Jumpin' Jack Flash, Midnight Rambler). 2000 Light Years From Home was a complete disaster though, with boring instrumental keyboard passages, an odd arrangement, and a long ending that is only tacked on to allow Jagger to spend the time climbing to the top of the massive set for his dramatic re-appearance at the start of Sympathy For The Devil.


I saw a Toronto show in 1989 on this tour, at the CNE, me and about 60,000 of my closest peeps. I'm reminded of the highs and lows of that show by watching this; great classics and fun moments, followed by clunkers and the feeling we were being hyped. The Stones have learned not to bother trying to sell new music anymore, and to tone down the contributions of the extra musicians since Steel Wheels. But there are always great points in any Stones show, and heck, Keith sings Happy on this, so it's all worth it for that.
Posted by Bob Mersereau at 10:10 PM