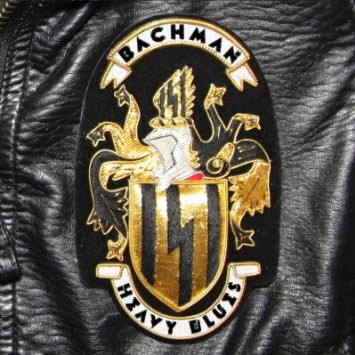 Randy Bachman will certainly try almost anything on the guitar.  He's done jazz albums, collaborative work, country-rock, hard rock, instrumentals, British Invasion, and pop, just to name a few.  He's collaborated, lead bands, gone solo, produced and reunited.  The one constant is his desire to have whatever he's doing be a hit in some chart or measurement.  When something seems to be done its course, he'll move onto the next, secure in the knowledge he's done it before, he might do it again this time.

This time, hard blues guitar is the game.  Leading a thundering power trio, Bachman crashes through a set of originals, handling all the lead vocals and most of the guitar.  He does hand over parts to pals and stars, including Neil Young, Joe Bonamassa, Luke Doucet from Whitehorse, Robert Randolph and an archival appearance by the late Jeff Healey.  The drums pound, the bass rumbles, and the guitar is mostly nasty and loud.  Thanks to the varied sounds of the guest soloists, things never get boring.  Oh My Lord, despite its hellish crunch, takes on a gospel vibe, especially when Robert Randolph does a sacred steel blitz through his solo.  Neil Young sounds just like Neil Young should on Little Girl Lost, the Crazy Horse version.

Previously, Bachman's hardest sounds were featured in the '70's sounds of BTO, but they always had pop and even jazz in the mix, and were only as metallic as Top 40 radio would allow.  This is the real deal, and Bachman actually gave up a lot of control to get there.  He's been in charge of his sound since The Guess Who days, but here he let hard rock icon producer Kevin Shirley (Jimmy Page & the Black Crowes, Iron Maiden, Aerosmith) work up his tricks.  Drummer Dali Anna Brindon and bass player Anna Ruddick make a mighty noise and bring guts to the project.  Bachman might not get back to number one here, but he'll sure make a lot of noise among guitar fans, and maybe wander down another rewarding path, at least for awhile.
Posted by Bob Mersereau at 12:14 PM