MUSIC REVIEW OF THE DAY: KEVIN BREIT - ERNESTO AND DELILAH 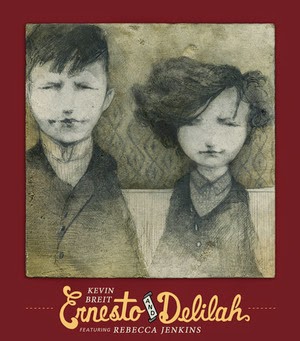 In the folk tradition, the older and more obscure the song, the better. And if you happen to discover a long-lost song, that's a treasure. Imagine finding out about an entire genre, with a century of recordings and a rich, obscure history waiting to be popularized? Man, every Avett brother and Lomax son would be drooling.


That's what Kevin Breit did with his 2012 album Field Recording, introducing us to the ancient and still-active players of the Upper York Mandolin Orchestra, under the guidance of the great Thomas Dooley, third-generation leader of a grand band of mandolin, mandola, and mandocello players. The rich, wonderful sounds of those antique and beautiful wooden works of art rang through the disc, delicious chords and spectacular trills and thrills from the massed strings.


Except not a whit of it was true. The orchestra was all Breit, as was the conceit. But the album was all real, and the real deal too. He had conceived of something new, a special sound of mandolins (and acoustic bass) leaning precipitously on the edge, dipping back and forth between the past and present, history and fact, today's musical smarts and yesterday's beauty.


So that's why one of North America's premiere guitar innovators (think Tom Waits as a guitar player rather than a singer) is still firing away on eight and more strings. This time, it's a double album, two distinct parts, with two different stories to tell. Ernesto is the continuation of the collaboration between Dooley and Breit, but this time on a trip to Rio. Dooley, it seems, has finally succeeded in acquiring the rights to the great Brazilian composer Ernesto Ciari's work. This disc is all instrumental.


Delilah is, surprisingly, all true. It's an album of duets with the similarly-talented Toronto vocalist Rebecca Jenkins, a collaboration much on Breit's mind for some time. Here he pairs his quirky charms with a willing participant. The delightful stories are full of rich tales and characters such as Murderous Dimitri and Henry Marx, playing the marxophone of course. Once again history and present day merge. Then's there's the rather other-worldly sensation caused by listening to two albums of mandolin music. I doubt Breit is bold enough to suggest he's invented new folk music, so I'll do it for him.
Posted by Bob Mersereau at 8:55 PM