MUSIC REVIEW OF THE DAY: BRIAN WILSON - NO PIER PRESSURE 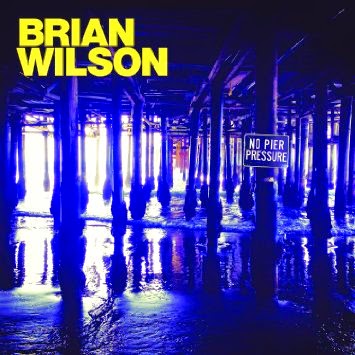 As much as I love the beautiful melodies and harmonies of Brian Wilson, the syrup is way too thick on this collection.  Attempting to be part of the modern pop world, the 72-year old gives it a go with guests Nate Ruess of .fun, Kacey Musgraves, Sabu and She & Him, with everything from dance to country in the mix.  Nothing takes off, and the songs are all mediocre at best.  Wilson himself sounds pretty good, his voice at the strongest its been since his comeback, but this is sterile and bland.

Writing with Joe Thomas, who has been involved in many of Wilson's project over the past 25 years, including the recent Beach Boys reunion album, seems to be one of the chief problems.  These are just minor-league efforts, with hack lyrics.  Seriously, they make Kokomo sound like Good Vibrations.  Every once in a while, touches of Wilson's instrumental genious comes through, but it's no surprise that the best song here is an instrumental, Half Moon Bay.  It's nice that Beach Boys colleagues David Marks, Al Jardine and Blondie Chaplin contribute, and certainly Jardine sounds the best he has in many years, but it's pointless to sound great on a dumb song.

Somewhere Quiet is a return to the old 50's/Four Freshman sound which influenced Wilson in the first place, and it works pretty well.  I wonder if he could have made a Sinatra album such as Dylan just did?  Really though, Capitol's Don Was, who has worked with Wilson several times before, should have put a halt to these proceedings and told Wilson it just wasn't worth it to his reputation.  And what happened to those sessions Wilson did with Jeff Beck a couple of years back, anyway?  Could they have been worse?  This smells like everybody wanted to have this album out before the well-reviewed Wilson biopic Love and Mercy hits theatres in June.
Posted by Bob Mersereau at 12:01 PM