MUSIC REVIEW OF THE DAY: JOHN MAYALL'S BLUESBREAKERS - LIVE IN 1967 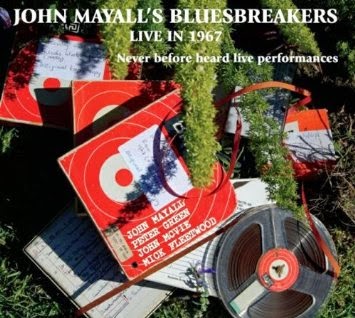 A new low in fidelity, but a Dead Sea Scrolls for British blues fans.  A legendary incarnation of John Mayall's Bluesbreakers, this band existing for only three months, before Peter Green, Mick Fleetwood and John McVie scuppered off to form Fleetwood Mac.  No high quality recordings were ever made of the band, but one fan from Holland did follow them around London for five shows with a basic mono reel-to-reel tape deck.  He just set up in the clubs and recorded, and not very well.  Vocals are muffled, there's little colour or clarity, and that's after much modern restoring.

The real excitement here is hearing Peter Green in a blues guitar hero setting.  Each night, he had to hold the spot that Eric Clapton had filled before, during the "Clapton is God" era, and prove himself the equal.  He's up for the challenge, never laying back, being the fast-fingered master on Looking Back, holding the sad notes on So Many Roads, accented with slashes and stabs.

For what we can hear of Mayall, he sounds like a killer front man, and perhaps his reputation has been neglected over the years as more focus has been on his famous sidemen.  This is easily a set I'd be thrilled with seeing today, peppered with Otis Rush and Freddie King numbers, the players seriously in synch.  I've heard much better bootlegs, but not many better performances.
Posted by Bob Mersereau at 10:03 AM