MUSIC REVIEW OF THE DAY: THE dB'S and FRIENDS - CHRISTMAS TIME AGAIN 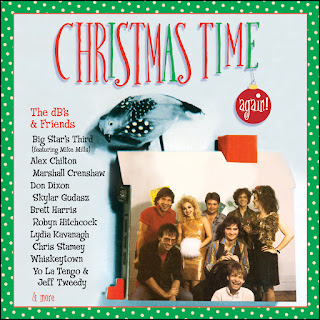 Now here's a Christmas gift that keeps on giving and giving. This album started life in the 1980's, when the dB's were still a going concern, and over the years it has been reissued, but each time with more new tracks added. Brilliant! Even better is the fact these guys have always had A-list buddies to call on.


The dB's themselves are one of the great power pop groups, like ever, and not only does the band have a few cuts here, leader Chris Stamey adds more of his own. Then there's old partner Peter Holsapple, who also knows lots of folks. From his stint as a touring member of R.E.M., he was able to call on Mike Mills for a live recording of Big Star's lovely Jesus Christ, done with Jody Stephens from that group. Keeping with the Big Star theme, Alex Chilton got involved in the past, and his version of The Christmas Song is featured.


On the awesome side is Whiskeytown, Ryan Adams' old band, with an original cut, Houses on the Hill, and Marshall Crenshaw does a good one, (It's Going to be a) Lonely Christmas. New for this year is Yo La Tengo with Wilco's Jeff Tweedy, doing an old Gary U.S. Bonds song Eight Day Weekend, Brett Harris contributing a lovely take on Harry Nillson's Remember (Christmas) and Robyn Hitchcock with a wacky spoken word piece called The Day Before Boxing Day. This set is now up to 22 cuts and over an hour long. Let's hope next time they make it a double set.
Posted by Bob Mersereau at 9:11 AM