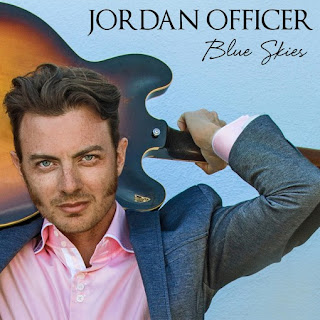 Montreal's Officer is making a lot out of his travels. Last time out, the album I'm Free came from spending six months checking out jazz and blues haunts in New York. This time, his inspiration came from a sojourn to L.A., where things got a little more varied. Officer explores R'n'B, pop, Tex-Mex, country, as well as the blues and jazz, a chance to work with all his influences.


Mostly covers, and great choices all, Officer chose to work with in a trio setting, the drums and bass playing subtle roles to his laid-back vocals, but monster guitar work. Got You On My Mind is a perfect choice, a '50's song that's been a hit both as blues and country. Shot of Rhythm and Blues is catchy as hell, his former employer Susie Arioli providing the backing vocal, a monumental groove that could fill any dance floor with fans of any style. The biggest and best surprise is The Crystals hit Then (S)He Kissed Me, shorn of its Phil Spector production, now a playful, loping tune, with Officer spitting out fast licks between lines, sounding part-way between Les Paul and Django.


Add in covers of Big Joe Turner, Leroy Carr, Fats Domino, a recent Dylan blues, When The Deal Goes Down, and a guest appearance by Tex-Mex keyboard king Augie Meyers (Sir Douglas Quintet, Texas Tornadoes) on Officer's own Takin' Off, and you have a roots explosion. But make no mistake, while the band, the arrangements, Officer's singing, the smart covers and fun are all a delight, this guy's tasty, retro guitar is astonishing.
Posted by Bob Mersereau at 9:54 PM