MUSIC REVIEW OF THE DAY: JETHRO TULL - TOO OLD TO ROCK 'N' ROLL: TOO YOUNG TO DIE 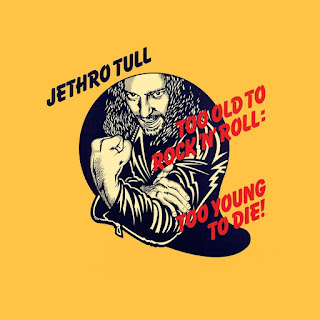 Crisis! As Jethro Tull fans know, the classic '70's albums are being reissued chronologically, in wonderful box sets complete with plenty of bonus cuts, excellent booklets and multiple remixes. The centrepiece of each one is a brand-new mix of the original album by the renowned Steven Wilson, the leading light in progressive rock audio circles. However, the only way you can remix an album is to have the original master tapes, with all the tracks separate. And for this Tull album, several of the masters had disappeared.


After fruitless searches, a surprising solution was found. A few weeks after the album's release, the band negotiated a performance on a British TV show, in a unique format. The show they did featured band performances, a bit of acting out the storyline, plus linking frames of cartoon illustrations, as found on the original album's sleeve. And because of the famous Musician's Union rules, the band could not simply mime to the original album tapes. It had to be live (risky) or a new recording of the songs, so the group re-recording the whole album.


Guess what? It's better. The band, especially Ian Anderson, won't admit such a thing, but listening back, these are tougher, tour-worn versions, more about the stage and less about the studio crafting. There are moments on the original album were the songs are too soft, especially at the start of the oft-quoted title cut, but on the re-done version, it starts with needed strength.


Too Old To Rock 'N' Roll: Too Young To Die is not one of the best-loved Tull albums, but it didn't get a fair shake. The press and some fans had grown tired of the band at the time of A Passion Play in 1973, and follow-ups War Child and Minstrel In The Gallery had failed to grab the excitement of the Aqualung and Thick As A Brick days. So there was decreasing audience and interest in Tull's usual concept albums and prog sounds.


It was another concept release, but as Tull stories go, not so hard to follow. As for the music, it was a lively and varied set, with plenty of rock moments, even some blues for the first time in several years for the group, featuring Anderson on harmonica. There were also light acoustic parts, and as good a batch of melodies as Anderson had placed on a record since Brick.


The concept story wasn't too lofty or odd either. There was an old rocker from the '50's, who refuses to change with the trends, feels washed up but then he survives a motorcycle crash, rock 'n' roll comes back in style, and he gets re-discovered. Hardly Quadrophenia but not too hard on the head. The songs, some related to the concept and others not, were a cut above.


Then there were a batch of other cuts dropped along the way, included as well. Originally the idea was to present this concept as a stage play, and there were several for that, plus a couple more dropped for time restrictions on the album proper. Some showed up later (One Brown Mouse on Heavy Horses in 1978), others that should have, and some that really should have made the album (A Small Cigar).


Again, lots of great bonuses, a very good album you probably have never heard, and a great book to keep you company all afternoon. Plus, I've seen this selling for less than $40 online, so definitely something worth considering for your Boxing Week purchases.
Posted by Bob Mersereau at 9:16 PM