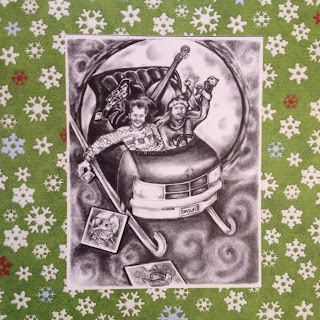 If Canada's best band is going to take on Christmas, they're not going to mess around with a bunch of retread songs.  Instead, this most versatile of groups does what it does best, coming up with a whole new batch of tunes done in a dozen different ways.  Well, eleven actually, but you get the point.  Each one's a different style, many done in homage to a classic form.

The set opens with When Christmas Falls On Peterborough, in tribute to home, done in a rural country style, with charms of a Santa Claus parade, a cold, frosty night and an acoustic feel that would make Lightfoot smile.  Next up is the first of many radical departures, Talkin' 'Bout Christmas (Ode to Leon), which, as advertised, presents a big, organ-fired soul groove in the mode of Leon Russell:  "Talkin' bout Rudolph, talkin' 'bout Vixen, talkin' 'bout Cupid, Donder and Blitzen."

And on it goes.  Prove Your Love This Christmas is as smooth and sexy as Smokey Robinson, definitely for that time after the kids are settled down for a long winter's nap.  Snowflakes is something completely different, just piano and emotion, tinkling and gorgeous notes imitating falling snow, the singer looking for someone special visiting at Christmas:  "When I open up the door, maybe next year there'll be more/than only snowflakes."

Then there's the wackiness of We Make Toys, a crazy, catchy, snap-along song with elves singing, kind of like those Chipmunk records only a lot more cool.  They even do a message song, in the tradition of John and Yoko and others, with What I Want For Christmas, "..is for Christians to behave like Christ, if even for one day like Christ," sounding like Roger McGuinn singing Turn, Turn, Turn.  I never thought the Baddest Band in the Land would do a Christmas album, but it turns out they have a big sentimental side.  That, and an encyclopedic knowledge of all the various holiday styles makes this another killer in their impeccable catalogue.
Posted by Bob Mersereau at 4:18 PM