MUSIC REVIEW OF THE DAY: LENNIE GALLANT - SEARCHING FOR ABEGWEIT 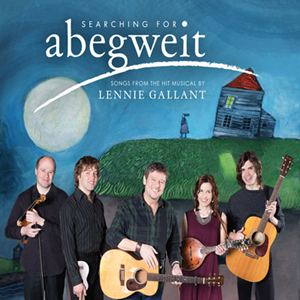 For the past two summers Gallant has been presenting a musical theatre piece in Charlottetown that expands on his usual role of songwriter, performer and story-teller. Called Searching For Abegweit, it's been a great hit, with sold-out performances every night. Gallant tells stories, legends and lore about his beloved home province, in and around his many songs that feature the Island.


The show itself (which I had the pleasure of seeing) works on several levels, including a dynamic visual one, with projections of his sister's paintings of Island life and history behind him, as well as some multi-media work with film, etc. Gallant is a comfortable actor in this situation, still retaining his usual on-stage presence, just incorporating a bit of script and a set list of stories and songs into the show. But at the heart of it all are his songs, some of his best-loved, and some brand-new ones as well.


For this double album, not a lot of the talk is retained; after all, you'd need the whole visual experience to make it all work, and this is more the soundtrack. But you can easily get the story, which is the tale of this rather wonderful place, going back to its First People, ahead to some of the very first settlers in North America, long traditions of fishing and farming, and life in a rural setting that still holds true today.


It wasn't a stretch to incorporate several of Gallant's tunes to the play, including the beloved Peter's Dream (fishing, hard times), Which Way Does The River Run (heading out and seeing the rest of the world), and Tales of the Phantom Ship (classic Island ghost story), Tales and Back To Rustico dated back to his very first album, Breakwater from 1988. But he also brought new material to the show, including Country Store, inspired by the Gallant family business back in Rustico growing up, and Searching For Abegweit, the theme song of the production. All 22 songs from the stage show are here, featuring his dynamic young band of relatives and Islanders. Searching For Abegweit is threatening to become the next Anne of Green Gables.
Posted by Bob Mersereau at 8:27 PM