MUSIC REVIEW OF THE DAY: THE WAINWRIGHT SISTERS - SONGS IN THE DARK 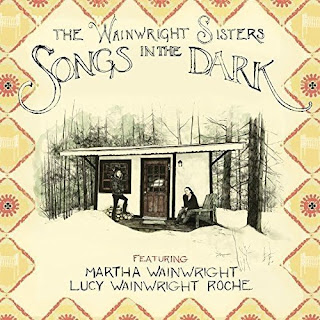 This is kinda perfect. The next generation of the extended Wainwright, McGarrigle, and Roche families have been mingling, mixing and matching their whole lives, in various combinations, for events such as Christmas specials. Now for the first time, Martha Wainwright and her half-sister Lucy Wainwright Roche have teamed up for a full album. For those who need a program to follow the family connections, they share a dad, Loudon, Martha being Kate McGarrigle's daughter, while Lucy's mom is Suzzy Roche.


The concept here is a series of dark lullabies, inspired by a mixtape given to Martha when her first son was born. Dark, you betcha. While the music may soothe the youngsters, if they knew what the words were, they'd have nightmares the rest of their lives. Take the traditional All The Pretty Little Horses, with its rarely-sung second verse, with a poor little lamb in the meadow, bees and butterflies plucking out its eyes. Then there's long-time family friend Richard Thompson's End of the Rainbow, telling an infant about the realities of life waiting for them outside the nursery: "Your father is a bully and he thinks that you're a pest/and your sister is no better than a whore."


It seems the sisters come by this naturally. Various family members have taken to the dark lullaby genre with glee. After all, it is a folk staple going back a few centuries, and the Wainright/McGarrigle/Roche clans are hip to all that. There are a couple of Loudon's songs, including Lullaby, where he sings to the horrible kid (Martha? Rufus? Lucy?) causing him so much grief, who needs to sleep so they can get up and do it all over again the next day. That's followed by Lullaby For A Doll, one of Kate's, a bittersweet song for a young Martha, her mother remembering her own childhood.


There are some others in the set to lighten the mood, including El Condor Pasa, best-known in its adaptation by Paul Simon, and the traditional tune Long Lankin, a vocal number the duo sings with their cousins, Lily and Sylvan Lanken, another family in-joke. The Wainwright Sisters delight in these family connections, and the way it's all wrapped around folk tradition. Good humour, good music, and the ties that bind.
Posted by Bob Mersereau at 10:02 PM