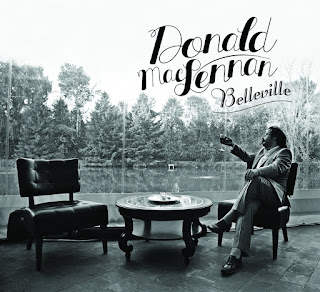 It's always a blast to hear the joyful and innovative playing of gypsy jazz, and Antigonish's Donald MacLennan gives us his own fun spin on his debut disc. Usually found with Ben Caplan & the Casual Smokers or The Modern Grass, violinist MacLennan is a wiz, and, as befits the genre, a risk-taker too. He's not above making whale noises with his bow, or doing a downright shocking cover.


It's his version of the Dolly/Whitney that will set tongues a-wagging, almost unrecognizable until he gets to the chorus, and then only because it's one of only a couple of vocal numbers on the album, and you know the famous words. Once you get it, it'll cause a broad smile. The rest of the set bounces between more standard, frantic gypsy stuff, and surprising excursions into the jazz side of things. I guess "standard" is a poor word though, because the playing is anything but basic, with fast and furious passages at times, with other moments devoted to intricate arrangements with surprising results.


The other musicians here are equally fun folks up to the task, with the renowned Duane Andrews on hand to match MacLennan on acoustic guitar, Andrews being the East Coast's leading light of gypsy jazz. Sharp acoustic bass player Ronald Hynes gets to underpin the whole affair, and Graham Scott's accordion sets the needed mood, putting us in a little cafe somewhere exotic. Whether his own compositions, a couple of Django's, or a skewed take on Cole Porter's What Is This Thing Called Love, MacLennan and crew delight in the fits and starts, the interesting juxtapositions of the combinations of their instruments, and the musical freedom. A final shout-out to Matt Myer from Gypsophilia for grand trumpet work, especially on the cut Ariology. Inspiring, I say.
Posted by Bob Mersereau at 11:04 PM