MUSIC REVIEW OF THE DAY: WHITEHORSE - THE NORTHERN SOUTH VOL. 1 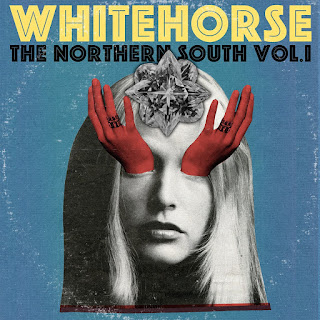 Covers have always been an important part of the Whitehorse world, with their first broad success coming with a raw version of Springsteen's I'm On Fire. The live E.P. The Road To Massey Hall features six favourites, from the likes of Neil Young, Dylan, and Ron Sexsmith. What makes a Whitehorse cover so different, and so successful, is the surprising places they take the well-known songs. The re-arrangements are imaginative, allowing for Luke Doucet to do his guitar magic, and Melissa McClelland to take us some other place altogether with vocals.


Here the duo tackle perhaps the most over-covered genre, the blues. The songs of Willie Dixon, Robert Johnson and the rockin' blues poet, Chuck Berry, are the staples of every bar band good or bad, and I'd be shocked, shocked if anybody could come up with something new to do to them.


Well, colour me shocked. Whitehorse does it again, taking the classics for a ride and ending up someplace else entirely. Johnson's Come On In My Kitchen starts out normally enough, but there's an entire new back half of the song, dominated by Doucet's banjo-like playing (may be a banjo, but he's also capable of doing that on the guitar, so I'm not committing myself here.) Little Walter's hit My Babe gets a new time signature and if possible, is more funky for it. Wang Dang Doodle, one of the nastiest songs ever made, as sung by Howlin' Wolf, gets sped up, becomes tight and tense, and then Doucet blazes away.


Even when they play it straight, the pair come up with something novel. Jimmy Reed's Big Boss Man is played as an acoustic number, but here McClelland and Doucet come up with delightful duet arrangement. Wow, if only these two could write their own innovative, provocative material. Oh wait, they do that too.
Posted by Bob Mersereau at 9:49 PM