MUSIC REVIEW OF THE DAY: KEV CORBETT - ON THE RIVER OFF THE LAKE 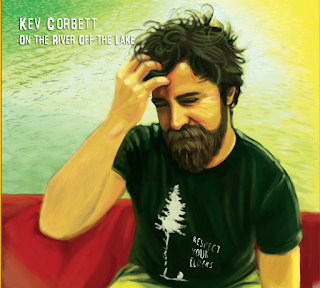 There's nothing better than a musician who knows how to be an individual, and to carve out their own piece of the landscape. Although this Nova Scotian is a beloved sideman for many East Coast artists, when he does get out on his own he has a singular vision for his writing, his vocal presence, his playing, his overall KevCorbettness. He's a deep-thinking folk-rocker seemingly plugged into the land.

A multi-instrumentalist, Corbett basically put the whole thing together with producer Jason Mingo, all the better to let his individualism come through. It's a pleasing blend of rough and ready; his voice is unpolished but true, the playing bang-on but never busy. He'll rock it up sometimes, make it a little bigger, like with the driving beat and keyboard parts in Nowhere But For You, but it still sounds organic and somehow rural. Match it all with the level of thought going into the lyrics, and we have a set of songs here that feel rough-hewn but artistic, like a chainsaw carving.

Rural life does play a big part right across the set, whether its from nature or a canoe trip, or by the tale of life in the Sydney Steel Mill, taken from a 60-year old poem, and turned into a crazy electric blues in The Ballad of Slim McInnis. On the calmer side, Bury Me By The River has the country charm of a Rick Danko vocal. Sorrow On My Mind is the oldest-sounding cut, sounding like a Civil War number, with banjo and guest harmonies and a great big chain gang percussion sound. Eclectic, sometimes electric, it's your basic KevCorbettness.
Posted by Bob Mersereau at 9:56 PM