MUSIC REVIEW OF THE DAY: THE WAILERS - THE WAILING WAILERS 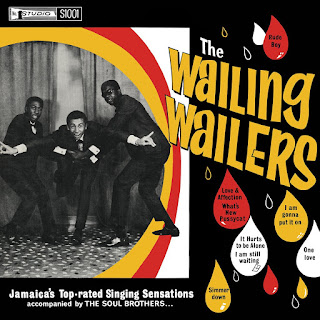 Here we have the exciting debut album of a group from Jamaica. The Wailers are comprised of Peter McIntosh, Neville Livingston and Robert Marley, who have already had several island hits produced by by Coxsone Dodd and released on his Studio One imprint. We're predicting more big things for this group in 1965!


Of course, this was years before Bob Marley, Peter Tosh and Bunny Wailer hit the big time, just before reggae too, while ska still ruled, and the sound was much rawer, The recording facilities were pretty limited, but not the playing, singing and spirit though. Here we find the original versions of Simmer Down and One Love, with more bounce before the cooler reggae style came in, but no less inspiring.


The big deal here is this is the first time the original album has come out on CD, with the right track listing, cover and no overdubs. Marley music has been repackaged so much, that's a find in itself, even if this was essentially a repackage of a bunch of one-off 45's in the first place. But there's a great charm to the tracks, even if the fidelity leaves a lot to be desired on several songs. Hearing how all the American soul and Top 40 hits were integrated into Jamaican music is half the fun, with some obvious influences. The styles ranged from the sophistication of Livingston's When Your Well Runs Dry, with its soul harmonies, to the cover of What's New, Pussycat to the doo-wop of Ten Commandments of Love. Behind it all were the great musicians of Jamaica, shining through even the muddiest of productions. Some of us think the '60's were a better period than the '70's for the country's music, and Marley's for that matter.
Posted by Bob Mersereau at 11:42 PM