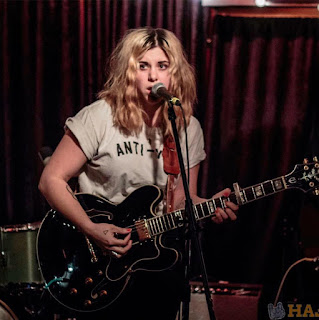 What did I do in the last four years? Umm, watched a lot of baseball, became addicted to Netflix, and of major note, switched from Raisin Bran for breakfast to a fruit-and-kale smoothie. Lost no weight.


While you're all going, "Woah, better pace yourself there buddy," that's nothing compared to Halifax's Dana Beeler. When we last heard from her back in 2012 with her debut, The Long Goodbye, she was a singer-songwriter doing alt-country, rural, bluegrass-flavoured songs, befitting her small-town Nova Scotia upbringing, in a family of musicians. But travelling a bit of a rocky road after that release (lousy relationships and such), and widening her experiences, she's come out swinging again with a whole new sound, and even a new name. Hello Delaware she calls the band she leads and the music she's made, with the first single now out, I Never Asked.


There's video about of the band, edgy and tough, with lots of guitar, positively shock and awe compared to what she used to do. The studio single is less raw, but pretty powerful still, with Daniel Ledwell's production letting her voice shine through, but still lots of loud chords in there. It's a good rockin' single with a touch of regret, and some of those lessons-learned lyrics up front. A good taste of what's to come, from the new album due in September.


Meanwhile, Hello Delaware is on the road promoting the single on the East Coast. You'll find them here: