MUSIC REVIEW OF THE DAY: THOM SWIFT - THE LEGEND OF ROY BLACK 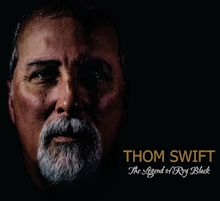 No need to check Wikipedia to find out who this Roy Black is, and what makes him a legend. You'll find no bio, he's actually a friend of Swift's who he greatly admires, but other than that, you'll get no info. You'll have to glean how he earned the legendary status from the themes explored by Swift on his latest, as usual one rich in explorations of humanity and honesty, in small but still heroic terms.


Swift's created a song cycle that doesn't have an obvious plot to it, but does explore how strength of character has great rewards. Whether its friendship, loyalty, integrity or just plain goodness, what goes around often comes around. In Swift's lyrics, keeping it simple, and being respectful lead to personal rewards, not big ones but life ones. He chooses a wise cover to end in on, the great hit for Porter Wagoner, A Satisfied Mind, the answer to the question, "Who is the richest man in the world?"


The music side continues to be a great strength of Swift's, as he put together a tight unit for the set. Joining him are his long-time partner in the band Hot Toddy, Tom Easley on acoustic bass. Asa Brosius sweetens things with pedal steel and dobro, and the great J.P. Cormier adds perfection on mandolin, violin and banjo. Swift puts his resonator to fine use throughout, including two instrumentals where the ensemble gets to shine on some rambling, woodsy music.


The album doesn't officially come out until June 3, but you'll be able to pick one up at shows before then, including this weekend at St. Andrews' Paddlefest, where he'll be performing a rare reunion show with Hot Toddy Saturday, as well as taking part in the Songwriter's Circle Sunday. After that, the album launch shows begin, starting with Casino Nova Scotia in Halifax on June 11.
Posted by Bob Mersereau at 6:54 PM