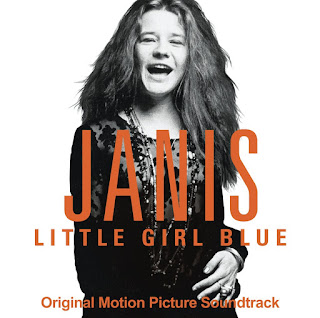 Here's the soundtrack from the new biography of Joplin, as seen on PBS, by filmmaker Amy Berg (West of Memphis). It was a successful but sad look, her problems with drugs overshadowing her accomplishments and talents. But it's important to remember her breakthroughs as a female performer and as an outsider in a conservative world. Oh, and all the tunes too.


The soundtrack is not a greatest hits, but rather a set largely made up of greatest live performances. The film concentrates on stage footage, where she was most accomplished, so we get lots of her show-stoppers, as well as a few studio tracks. There's not much new stuff; the Joplin vaults have been picked through pretty thoroughly, so there's just one track making its debut, a 1968 live version of Piece of my Heart. But you'd have to be a big collector to have all the others, as they come from a wide variety of sources, including box sets, expanded editions of albums, live collections, posthumous obscure releases and even a previous film, Janis, made in Canada in 1974,


Along the way, we get to hear her at the shows that made her famous; Monteray, Woodstock, the Festival Express train tour in Canada. Some of the nights are better than others, depending on her state, and whatever band she had. Big Brother was always energetic, but often notoriously sloppy, and that's shown here on those early tracks in her career. But Joplin almost always rose above it with her powerful, impassioned vocals. Every bit of the joy and the sadness and the blues of her life was on display when she sang, and this set of 17 performances captures that as well as any of her collections.
Posted by Bob Mersereau at 7:58 PM