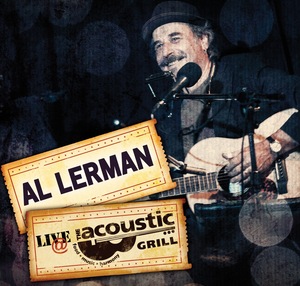 Al Lerman is best-known for leading the Juno-winning blues group Fathead, but he also does the solo thing, and does it well.  After a recent studio disc, Crowe River Blues, he returns with this live one, to show off his stuff alone and acoustic.  Armed with just a guitar and a harp, Lerman wanted this recording to reflect his own roots watching talented blues and folk performers in the famous Yorkville Village scene in 1960's Toronto, when he was first exposed to the real deal.

It's hard to do the classics we all know,and make them sound fresh, make them yours, but that's exactly what Lerman manages here.  Cocaine, Good Morning Little Schoolgirl and Nobody Loves You When You're Down And Out might get played a hundred times tonight in bars across North America, but Lerman's versions retain the excitement of that first discovery.  Of course, it helps that he's an engaging performer as well.  With no-one to lean on up there, he takes right over, and puts on the kind of show you want as a blues fan, a great voice and fine playing, especially on harp, his regular gig with Fathead.  Sprinkling in five of his own numbers alongside seven covers, there's never a moment where you wish he'd go back to something you know, a tribute to the warmth coming off the stage with each vocal.  Sometimes the very best sound you can get is back-to-basics, and this one makes me wish I was there.
Posted by Bob Mersereau at 1:39 PM