MUSIC REVIEW OF THE DAY: THE COOPER BROTHERS - SOUTHBOUND 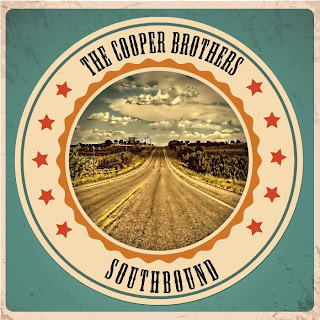 Southern rock was the name coined for the music of several 70's bands specializing in boogie-blues with a twang, led by The Allman Brothers, and including Lynyrd Skynyrd, The Charlie Daniels Band, Marshall Tucker Band, .38 Special and a bunch more.  Of course, the capital of this good ol' music was Ottawa.  Okay, not so much, but you didn't have to be born in the South to play that style.  And Ottawa's Cooper Brothers did it just as well as their U.S. contemporaries, scoring North American hits with The Dream Never Dies and I'll Know Her When I See Her, doing major tours with contemporaries like The Doobie Brothers and Daniels, and even getting signed to the spiritual home of southern rock, Capricorn Records.


That last move was a blessing but then a curse, as Capricorn went under in the early 80's, and the band never really regained that momentum.  The members went their ways, but in 2006, a Greatest Hits spurred enough interest for them that brothers Dick and Brian Cooper got the bug back.  This is the second album since then, after 2010's In From The Cold.


Recorded with producer Colin Cripps on a break from his Blue Rodeo duties, Dick Cooper has found his writing chops intact, delivering eleven tunes in the classic form.  Brother Brian brings his distinctive twang, complementing all the twin guitar licks, slide solos, pedal steel, banjo, fiddle and all you'd hope for.  Lead single Southbound is a clever twist on the snowbird's wish to get away from winter, a sly reference to their southern rock sound.  Cooper keeps it up with the lyrics to The Last Time I Saw Georgia, with references to Capricorn rising (get it?), a love song brimming with hints about the band history.  So far, so smart, and a blast from the past.  But Waiting For The Hammer To Fall is a stone-cold true country gem, with great high vocal from Brian, lots of sweet harmony, a number band pal Jim Cuddy would be proud to pen.


More surprises arrive with the tender Love's Been A Stranger, where Brian duets with Kellylee Evans, another Ottawa singer.  The Juno-winning jazz singer helps make this a stand-out cut, not just with her excellent harmony lines, but by pointing out all the strengths in the song, and the band.  Brian's own distinctive voice shines, Dick's words are touching, and the string and horn arrangement show the group is more than just a cliche of that 70's sound.  The song is the key for me, as the album now opens up to reveal more nuances, like the Western touches of Bordertown, the funky humour of the earthquake tale Five Point Five, and the statement of musical integrity, Club Shangri-La.  The Cooper Brothers were always full of surprises, and they're still serving them up in part two of their story.
Posted by Bob Mersereau at 10:19 PM