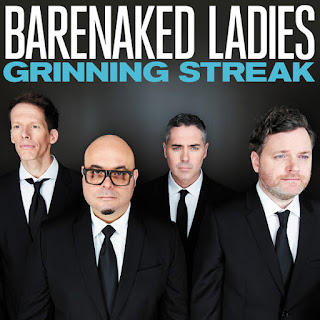 Well, what's a Barenaked Lady to do?  The band still has lots of fire in its collective belly, off on another big tour of amphitheatres across heartland America this summer, with Ben Folds Five and Guster in tow.  There's actually a kind of BarenakedNation or something out there, loyal folks who follow along in each city, a safe alternative to those rowdy Dave Matthews Band shows.  And I bet a good time is had by all.

And each concert ticket purchase gets you a free download of the new Grinning Streak album, a good deal, and a good way to get their music into the hands of folks before they hit the show, so hopefully they will cheer the new single, Boomerang, at least.  Meantime though, there doesn't appear to be any place left on radio for the group.  Certainly Boomerang didn't bother the likes of Pink, Justin Timberlake and Bruno Mars in the Top 40. It ain't the halcyon days of One Week.   Lesser bands would crumble, but instead they've been coming up with new business models over the past decade, embracing download sales, solidifying this loyal fan base, and reinventing the group sound minus one co-founding lead singer and songwriter.  Barenaked Ladies may not command the attention of the greater pop world these days, but they do have a niche, and they are holding on.

Which brings us to the new album, and since I'm assuming you aren't in the fan club, but possibly used to enjoy them, there's at least some curiosity in what they're up to.  Anything particularly different?  Nope, aside from the missing co-vocalist, this is the band you've known and maybe loved.  It includes lots of whimsical, witty lyrics, and even a stand-out or two.  The cut Did I Say That Out Loud?, which starts off in their mellow mood, has great rhymes, and hits with prime, catchy chorus.  It would be an excellent followup single in, say, 1999.  Opening track Limits has excellent piano from Kevin Hearn, and even a little throw-back synth, which is hip these days.  Hearn's own Daydreamin', the one track he sings, giving Ed Robertson a break from lead vocals, is another synth-play tune, with a spacey-dreamy feel.

It total, you can take this two ways; either dismiss it as been there-heard that from the band, or enjoy it for what it is, cleverly crafted and lighthearted pop, by a group that knows how to do it.  Their new music may not be making the world laugh anymore, but at least there's something here to grin at.
Posted by Bob Mersereau at 9:46 PM