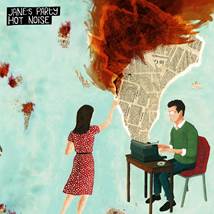 The Toronto group that doubles as the Band part of the Devin Cuddy Band, this is their second album, after a 2009 debut The Garage Sessions.  This time out though, it's on the back of a bunch of national tours and strong recent buzz that could (and deserves to) give them a breakthrough.  It's a strong, accomplished set, with a clearly defined sound for the group.


What's grand about Jane's Party is the unabashed, feel-good pop sound.  You could almost call it power-pop, except the group is so tight.  With three singers, and lots of classic influences, the songs bounce back and forth like a great 60's - 70's Top 40 station.  One of them sounds somewhat British, so there's a Beatles-Kinks thing going on, but with a little more modern guitar attack.  Sloan then, without the punk background


Anyway, I should have thrown around enough names there to attract a few folks.  The good thing is that not only do they have the chops, they have the songs to back it up, too.  I'm especially fond of 'Til You Got Yours, with it's slightly menacing verses that give way to a sweet chorus, with lots of harmonies and an infectious electric piano part.  Meet Me Halfway is another of those pretty melodies on top of gritty guitars, lots of falsetto backing vocals, and a lead break straight off the banks of the Mersey, circa 1964.  Best of all, there are another 10 of these on Hot Noise, and never once did I think 'that's not as good as some of the others.'
Posted by Bob Mersereau at 8:49 PM