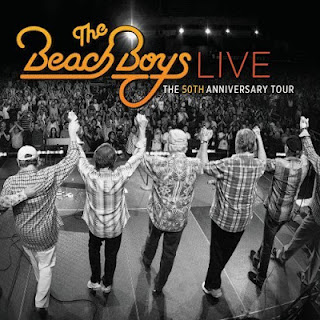 Here's a much better representation of The Beach Boy's 2012 50th Anniversary tour, as opposed to the rather lame one-hour DVD released last fall.  This two-disc set offers a full two hours, taken from various shows around the world.  At 41 tracks, it covers the bulk of the ever-changing setlist, which extended to over 60 songs on the final night in London.


It is, of course, hit-packed, with the emphasis on early surf, early cars, occasional later hits such as Rock and Roll Music, Sail On, Sailor, and (gulp) Kokomo, and two rather charming cuts from their new album.  But as deeper fans know, the shows actually featured some of the more artistic numbers long-loved by the devotees, such as SMiLE's Heroes And Villains, some Pet Sounds tunes, and even early 70's non-hits Add Some Music To Your Day, California Saga: California and All This Is That.  And the genial Bruce Johnston delivers the surprise hit of the album, performing his poignant Disney Girls from 1971's Surf's Up album.  There are enough of these gems to satisfy the hard-core Brian Wilson addicts.  Then there's Barbara Ann, Fun, Fun, Fun, Surfin' USA, I Get Around, Surfer Girl, California Girls, Little Honda, and lots more for the rest.


Yes, this is hardly the Beach Boys of old, and almost all the high parts and rich harmonies are handled by the huge backing band.  And there has been a ton of work done to the recordings back in the studio, to the point of distraction at times, so obvious is the overdubbing.  But today's concert-goers are almost like movie audiences, ready to accept the suspension of disbelieve.  They just want it to sound and look good.  Two Beach Boys are dead, Mike Love is now having some vocal issues, and Brian Wilson is a muddled presence at best, certainly unable to approach his golden-throated parts of yesteryear.  The fact they put on not just a credible, but enjoyable show was enough for the many around the world who attended, and this souvenir is a fun listen, even if it doesn't stand up to the usual scrutiny we use on much younger bands.
Posted by Bob Mersereau at 9:42 PM